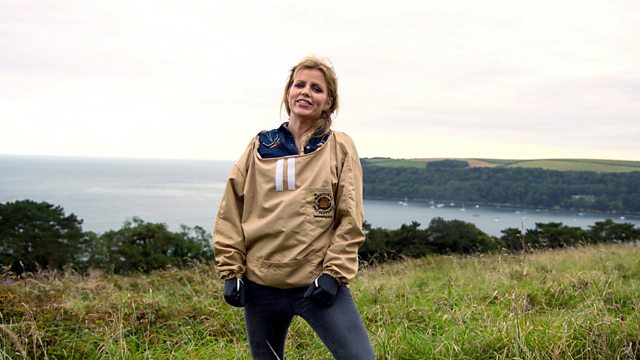 Ellie is on the Rame Peninsula - Cornwall's 'forgotten corner' - and visits Mount Edgcumbe, where the UK's first ever native dark honeybee reserve has just opened. Previously thought to be all but extinct in the UK, an almost pure and distinctive population has been identified on the Rame Peninsula, and although they make up only one per cent of the bee population, it is thought they might hold the key to more sustainable beekeeping - Ellie finds out how.

We also catch up with Malcolm Baker, the last traditional fisherman in the Rame Peninsula. Malcolm relies on traditional tools and techniques and his knowledge of the sea to fish like generations of fishermen before him did, but with the world around him evolving at a rapid pace, Malcolm found himself becoming out of touch. However, an unlikely friendship with an Austrian youth worker had unexpected results for them both. Leo Kaserer made a film of the tradition of fishing in the Rame Peninsula with the idea of passing on dying skills to the next generation. The film followed Malcolm helping a group of disadvantaged youngsters get back on track, and the programme shows how they repaired a 100-year-old wooden fishing boat and experienced Malcolm's challenging way of life.

Tom is on the hunt for traditional British craftsmen and women. With many heritage crafts dying out, Tom is keen to find out what can be done to save them.

Ellie’s on the Rame Peninsula - Cornwall’s ‘Forgotten Corner’. A place of mystical woodland and remote coastline dotted with secret beaches and smugglers coves.  Ellie’s here to see. the UK’s first ever, native dark honeybee reserve.  Previously thought all but extinct in the UK – an almost pure population of the bees has been identified on the Rame Peninsula. And the B4 (Bringing Back Black Bees) project aims to protect and conserve the native Cornish dark honeybee.

Tom is on the search for something rather elusive this week. The UK’s heritage crafts are under threat and skills that have been around for hundreds of years could soon become extinct. But is this something we should worry about or have businesses always come and gone? Tom looks at what is being done to save them and what might be taking their place.

Malcolm Baker is one of the last traditional Fishermen on the Rame Peninsula. He’s still fishing with traditional tools, techniques and an unparalleled knowledge of the sea. Now an unlikely friendship with an Austrian youth worker has had unexpected results and Malcolm is now an unwitting film star. Leo Kaserer made the film “The Last Fisherman’ out of a love for the Rame Peninsula, the tradition of fishing and the idea of passing on dying skills to the next generation. The film follows Malcolm as he helps disadvantaged youngsters get back on track as they experience his honest, simple and challenging way of life.

One Man and his Dog

After meeting the teams from England and Scotland last week, this time Adam’s off to Wales and Ireland to meet the competitors representing their countries at this year’s One Man and his Dog competition. This year sees the introduction of braces, which is where one person controls two dogs at the same time. So will the Welsh or Irish teams be good enough to steal England’s crown when all four nations fight it out on Hampstead Heath for the final?

Matt Baker launches this year's Countryfile Ramble for BBC Children in Need revealing how you can participate by joining one of the presenter-led rambles taking place across the UK, or putting on your own sponsored ramble.  We also meet the Penn family who will be taking part and have received support from Children in Need through a local hospice after three of their children were diagnosed with the life limiting Batten Disease.

Find out how to do your own ramble

Ellie’s been to visit the first ‘British Black Bee Reserve’ at Mount Edgcumbe Country Park. But, despite their rarity they’re not the only black honeybees here. Jo Widdicombe has been keeping them for over 30 years and it was his hives that supplied Mount Edgcumbe. Ellie meets Jo at his apiary just along the coast, where he produces honey. Some farmers don’t see native bees as economically viable, and prefer to import their bees from abroad, but Joe thinks his work proves that the bees can be treated as valuable livestock, deserving the same management, protection and policy as rare breeds of livestock.

Find out more about selective improvement of native bees