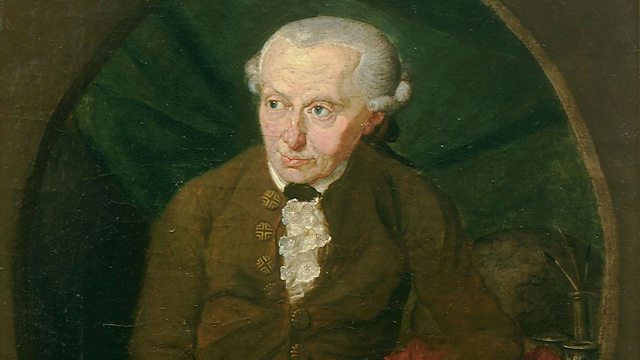 Melvyn Bragg and guests discuss one of Kant's best known ideas: 'Act only according to that maxim whereby you can, at the same time, will that it should become a universal law'.

Melvyn Bragg and guests discuss how, in the Enlightenment, Immanuel Kant (1724-1804) sought to define the difference between right and wrong by applying reason, looking at the intention behind actions rather than at consequences. He was inspired to find moral laws by natural philosophers such as Newton and Leibniz, who had used reason rather than emotion to analyse the world around them and had identified laws of nature. Kant argued that when someone was doing the right thing, that person was doing what was the universal law for everyone, a formulation that has been influential on moral philosophy ever since and is known as the Categorical Imperative. Arguably even more influential was one of his reformulations, echoed in The Universal Declaration of Human Rights, in which he asserted that humanity has a value of an entirely different kind from that placed on commodities. Kant argued that simply existing as a human being was valuable in itself, so that every human owed moral responsibilities to other humans and was owed responsibilities in turn.

David Oderberg
Professor of Philosophy at the University of Reading

Alison Hills at the University of Oxford

David Oderberg at the University of Reading

P. Guyer, Kant’s Groundwork for the Metaphysics of Morals: A Reader’s Guide (Continuum, 2007)