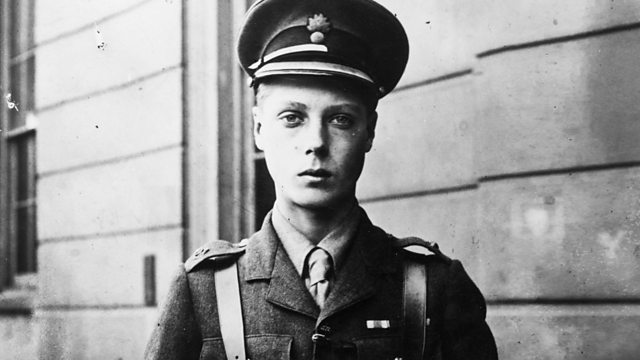 4 Extra Debut. Edward VIII, the king who abdicated, was deeply marked by the Great War. Heather Jones reveals his true story. From 2017.

'This is a most rotten war unless you are actually fighting.' Edward VIII, the king who abdicated, was deeply marked by his experience of the First World War.

Heather Jones reveals the true story of the front-line prince, drawing on new research from the Royal Archives. Anxieties over the risks of exposing young members of the Royal Family to the realities of combat are nothing new. But the first frontline Prince of the modern age was transformed and marked by his experience of the Great War: this was a time vital to the development and public image of the future King Edward VIII.

Yet his wartime role is little remembered or known. Unlike the other heads of European monarchy, Edward was constitutionally bound and politically protected. Germany's Crown Prince was directing the forces at Verdun whilst Edward was supposed to be safely away from the front.

Heather Jones has spent the last four years piecing together Edward's crisis at not being allowed to serve in direct combat, and his role as an ordinary staff officer. The young prince struggled with ideas of heroism, masculinity & service as he donned khaki & alarmed those charged with protecting him with his risk taking. Heather Jones tells the story of the Prince who wanted to fight - and whose bravery turned sour in the years of conflict.