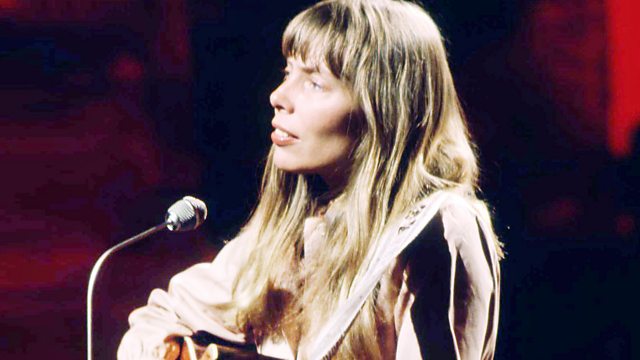 Journalist and broadcaster Lynne Truss celebrates the work of Joni Mitchell and tells the story of how she became and continues to be her Muse.

Not everyone appreciates the tonalities, lyrics or even the shrieky voice of Canadian artist and musician Joni Mitchell but in a dusty class room in 1971 Lynne Truss decided she loved the writer of Woodstock, Big Yellow Taxi and Both Sides Now. It was a bond forged in the face of the frosty indifference of fellow pupils in Miss Cheverton's music class at the Tiffin Girls School in Kingston Upon Thames.

Even Lynne is slightly mystified when she was asked who was her muse that, as a person mostly famous for writing a book on punctuation, she replied; Joni Mitchell. Lynne explores why a series of albums from Ladies of the Canyon to Heijra taking in Blue, Court and Spark and The Hissing of Summer lawns' has wrought such influence over so many.

For her aficionados Joni Mitchell is more than a song writer. Lynne observes that for some the attachment goes beyond the personal; its a complete identification with the struggles of dealing with high emotion and how to cope.

In the programme she speaks to the poet and playwright Liz Lochhead, the author Linda Grant, Elbow's front man Guy Garvey, her latest biographer the Syracuse University academic David Yaffe and Gina Foster the singer with the UK act Joni's Soul, which she insists is not a tribute but a celebration act.

Lynne contends that despite at the time being overshadowed in favour of Bob Dylan, Leonard Cohen, Paul Simon and others Joni Mitchell will come to be regarded as the greatest exponent of the art of singer-song writer from that era and concludes that what makes her a muse can be found less in the brilliant lyrical summations of eternal questions like love, loss and freedom but more in her absolute commitment never to compromise her art - to remain true, above all else, to her own muse.