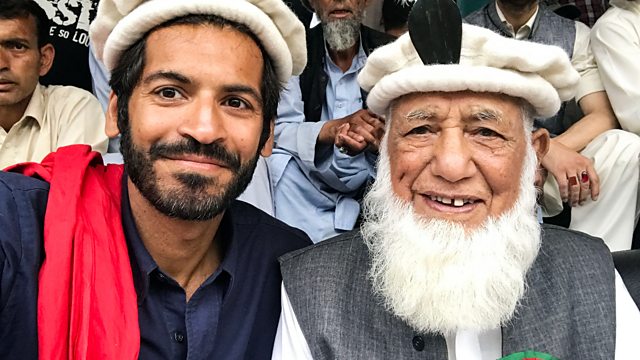 Dangerous Borders: A Journey across India & Pakistan Series 1
Episode 3 of 3

On the third and final leg of their journey, journalists Adnan Sarwar and Babita Sharma travel along the northern part of the border which divides India and Pakistan.

On the third and final leg of their journey, journalists Adnan Sarwar and Babita Sharma travel along the northern part of the border which divides India and Pakistan. It is the most contested section of the border - and the most dangerous. Adnan begins by meeting a 22-year-old woman, Rabia, challenging tradition by training as a fighter pilot in Pakistan's air force. It plays a key role in defending the country's borders, and Rabia is proud to have been chosen to perhaps one day fight on the front line.

Babita's journey takes her into the state of Jammu and Kashmir, a region which is still being fought over by India and Pakistan, who both claimed it at Partition. She gets as close to the border as she has been on her whole trip, hearing stories of Indians who have been affected by cross-border attacks. When Geet Singh was working in his fields, he and his son were hit by mortar fire. Geet lost his arm. His son lost his life. Babita meets his widow acting as a powerful reminder that the conflict between India and Pakistan is still very real.

Adnan's route takes him high into the mountains of northern Pakistan, through Chilas, a drive that requires armed guards. Recent terrorist attacks by Islamic extremists on tourists and Shia Muslims mean that the Pakistani authorities are on high alert in the area and are especially concerned for the safety of foreigners and tourists travelling through the region.

Babita then catches the Jammu Express, part of an impressive railway building project that will include the world's highest railway bridge, through the lower Himalayas to Katra. Here she follows in her mother's footsteps, and eight million other pilgrims a year, on a trek up the Trikuta Mountains to Sri Mata Vaishno Devi, one of the holiest Hindu sites in the world.

Adnan travels on to Gilgit-Baltistan, formerly part of Jammu and Kashmir, where he meets Dr Sharif, one of the men who fought with the Gilgit Scouts militia during Partition and a local celebrity as captain of the hugely successful Gilgit Scouts polo team. Adnan and Dr Sharif both go on to attend a brutal freestyle polo match between the local police force and the Northern Scouts in the shadow of Nanga Parbat, the ninth highest mountain in the world.

Babita travels on to Srinagar, Jammu and Kashmir's summer capital, where she witnesses the unrest that has plagued the region. Kashmiri separatists hold weekly protests against what they see as Indian occupation, and Babita is caught up in the action. The unrest has had a massive impact on the local tourism industry at the beautiful but sadly empty Dal Lake, a place that provided The Beatles with a safe and quiet haven in the 1960s, and which has remained popular with visitors ever since. She then goes on to meet local artist Masood, where she finds out about the mass blinding of local children at the hands of the Indian security forces and reflects that there doesn't seem to be much hope for the future as the situation seems to be getting worse.

On the Pakistani side of the border, Adnan travels along the Karakoram highway, an 800-mile stretch of motorway that links China and Pakistan and forms part of the CPEC, the China Pakistan Economic Corridor, an ambitious project between the two countries that brings huge amounts of Chinese investment into Pakistan. He arrives at Attabad Lake, formed by a landslide in 2010 which blocked part of the highway, and sees how the Chinese and Pakistani governments restored the affected part of the road with a £200million restoration scheme. He then travels to within 60 miles of China, where he meets the moderate Ismaili Muslims of Passu village. Despite the remoteness of their location, they claim to have 100 per cent literacy and place huge importance on education. His journey ends close to the Siachen Glacier, the highest battlefield in the world, where he reflects on his journey and the optimism he feels for himself as a British Pakistani and for Pakistan's future.

Babita's journey takes her along the 11,000ft-high Zojila Pass, one of the most dangerous stretches of road in the world, to Kargil, the site of a 1999 conflict between India and Pakistan and only six miles from what is known as the Line of Control. Even to this day, there has been no agreement between India and Pakistan about the border here. Babita discovers how the border has divided families and still affects people in the area to this day. She finishes her journey in the Buddhist area of Leh, at Hemis Monastry, and in the peaceful surroundings reflects on the emotional rollercoaster she has been through, how Partition ripped the heart out of India and how people are still paying a price to this day.

See all episodes from Dangerous Borders: A Journey across India & Pakistan

Explore the OU's historic timeline and collection of articles about borders 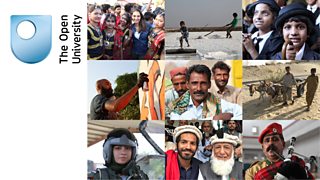 More about borders, their creation and their importance