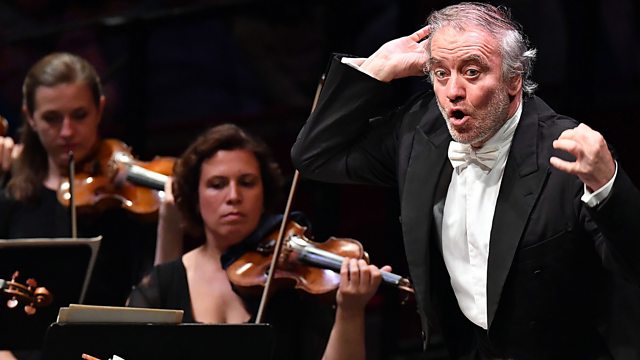 Prokofiev: Cantata for the Twentieth Anniversary of the October Revolution, Op 74
Tchaikovsky: Piano Concerto No. 3 in E flat major

8.15: Interval: 'The Noise of Time' by Julian Barnes
Before the Proms performance of Shostakovitch's Fifth Symphony, Julian Barnes reads from his recently acclaimed novel about the composer.

What has he written? Is the question to himself? What will he be remembered for? Four symphonies, one piano concerto, some orchestral suites ... All this retrospection is brought on by his visit to the Big House, where he will questioned by Interrogator Zakrevsky.

Who better than Russia's foremost opera orchestra and chorus to mark the centenary of the Russian Revolution? Along with Artistic Director Valery Gergiev they perform Prokofiev's epic Cantata for the 20th Anniversary of the October Revolution - a work that captures the violence of the Bolshevik Revolution and the birth of the Soviet Union in bold orchestral textures and rich, folk-infused choral writing.
The cruelty of the Stalinist regime is captured in Shostakovich's evocative Fifth Symphony, and regular collaborator Denis Matsuev joins the orchestra as soloist in Tchaikovsky's final work - the single-movement Piano Concerto No. 3.