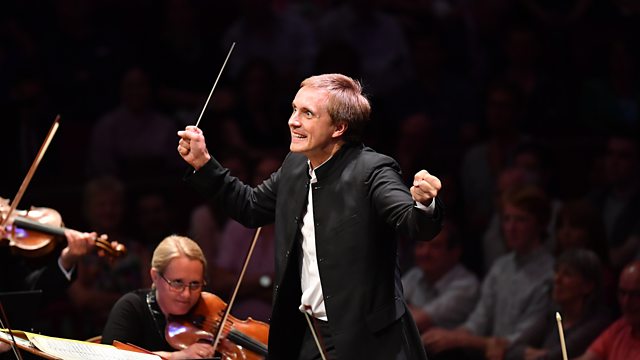 Live from the Royal Albert Hall, The Oslo Philharmonic play Stravinsky and Shostakovich, and are joined by pianist Leif Ove Andsnes for Rachmaninov's Fourth Piano Concerto.

Live from the Royal Albert Hall
Presented by Penny Gore

8.15: Interval: PROMS EXTRA
Historians Helen Rappaport and Victor Sebestyen consider the figure of Lenin, as the Proms prepares to mark the 100th anniversary of the Russian Revolution. Hosted by Anne McElvoy. Recorded earlier as a Proms Extra with an audience at Imperial College. Producer: Luke Mulhall

It would be impossible to mark this year's centenary of the Russian Revolution without a performance of Shostakovich's Symphony No. 12 - subtitled 'The Year 1917'. Its sweeping, filmic music paints a portrait of Lenin, both as a man and a political force.
Acclaimed Shostakovich interpreter Vasily Petrenko conducts the Oslo Philharmonic in an all-Russian programme also featuring Stravinsky's ever-popular suite from The Firebird and Rachmaninov's mercurial Fourth Piano Concerto (continuing our cycle of the composer's complete piano concertos).
Norwegian pianist Leif Ove Andsnes, whose Beethoven concerto cycle was a highlight of the 2015 Proms, returns as soloist.