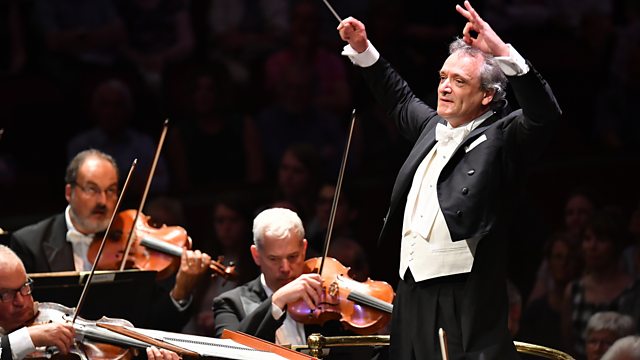 c.20:25 Interval: PROMS EXTRA
Kathleen Burk, Professor of Modern and Contemporary History at UCL, reflects on the character and rhetoric of Abraham Lincoln, the great American president whose 'Gettysburg Address' is considered to be one of the greatest and most influential statements of national purpose and the principles of human equality. She's joined on stage by BBC Radio 3 New Generation Thinker Dr Joanna Cohen from Queen Mary College, London, and presenter Rana Mitter.
Recorded earlier as a Proms Extra with an audience at Imperial College. Producer: Katy Hickman

The Cincinnati Symphony Orchestra makes its Proms debut with Music Director Louis Langrée, bringing works by two celebrated American composers. Bernstein's symphonic suite drawn from his soundtrack to On the Waterfront is a cinematic journey through the docks and slums of post-war New Jersey, telling the story of one man's heroic fight against corruption and intimidation. In a year in which America has inaugurated a new president, Copland's Lincoln Portrait offers a musical homage to another. Lincoln's greatest speeches are set against a stirring orchestral tone-poem: America in music. The climax of the concert is another passionate statement of musical nationalism: Tchaikovsky's Symphony No. 5.