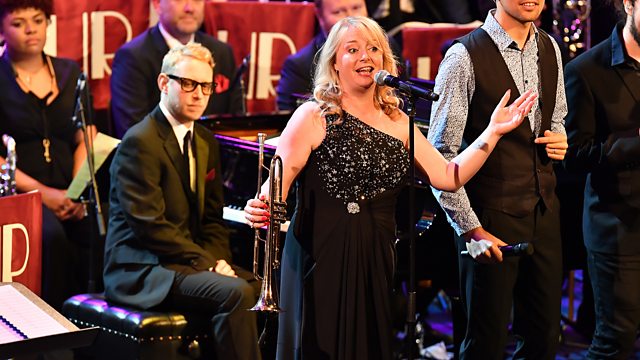 Live from the Royal Albert Hall
Introduced by Katie Derham

From stomps and shuffles to boogie-woogie and blues, from bebop to Latin, this Sunday matinee Prom presents a slice of musical action from the 1930s and 1940s. Two roaring big bands battle against each other, joined by special guests and led by Guy Barker and Winston Rollins.
Singer and broadcaster Clare Teal is our guide on a journey that celebrates the triumphs of big band greats, including Duke Ellington, Count Basie, Benny Goodman, Tommy Dorsey, Jimmie Lunceford, Boyd Raeburn, Machito, Stan Kenton and Woody Herman.
Tribute is also paid to a highly respected but unassuming giant of the big band world - pianist, arranger and composer Mary Lou Williams.

During the INTERVAL: The Literature of Jazz. To complement today's Prom, Geoffrey Smith presents a celebration of the novels and poetry that were inspired by the jazz of the Thirties and Forties, from F. Scott Fitzgerald to Jack Kerouac. With readings by Jamie Parker and Rhashan Stone.
Producer: Justine Willett

Jamie Parker is an acclaimed British actor who made his name as part of the original company of Alan Bennett's The History Boys. He recently won an Olivier Award for his role as Harry Potter in the West End play Harry Potter and the Cursed Child.
Rhashan Stone is an American-born British actor and comedian. He is best known for appearing in comedy shows such as Desmond's and Mutual Friends.
Geoffrey Smith presents programmes on jazz for BBC Radio 3.