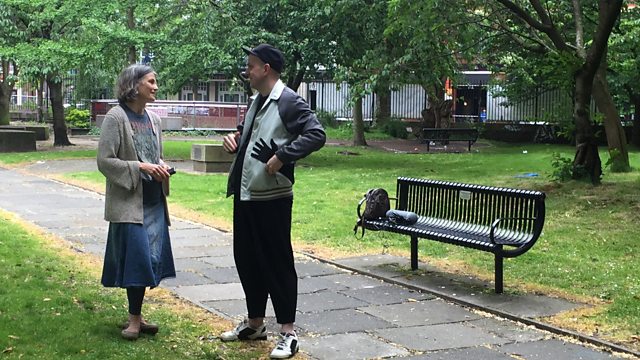 A new poem by Andrew McMillan echoes remarkable life stories told to Anna Scott-Brown on a bench beside Manchester's gay village in the aftermath of the Manchester Arena bombing.

Anna Scott-Brown hears more stories from the people who stop to sit beside her on benches around the country. In this edition, she sits on a bench next to Manchester's gay village, in the aftermath of the Manchester Arena bombing.

Throughout the programme, a specially commissioned work by poet Andrew McMillan draws on the voices and stories of those passing the time in Sackville Gardens - a man with schizophrenia and a woman drinking to forget, a potter looking for inspiration in the shape of the trees, a man and his ex boyfriend walking a dog from one of the nearby penthouse flats, the young carer with great compassion, and the woman driven by her past to fulfil her dreams.

The impact of the recent bombing at the Ariana Grande concert in the Manchester Arena is never far away, while the stories depict a noble city with a distinctive spirit, which comes to the fore at moments of crisis.

Hidden lives are revealed and common threads recur as Anna's gentle - but insistent and sometimes extremely direct - questions elicit poignant and profound responses from those sitting on the bench.