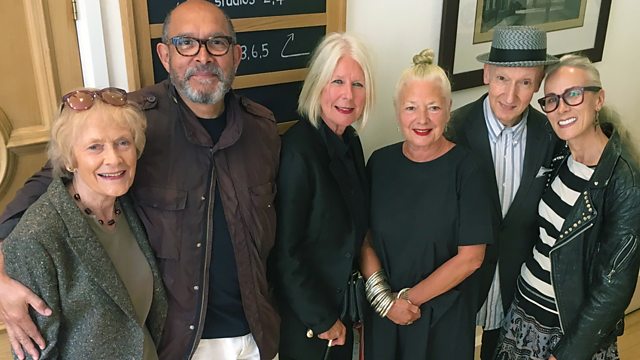 Sue MacGregor reunites the designers who transformed fashion in the 1980s and paved the way for the modern fashion industry.

The eighties are considered one of the most experimental periods in British style history, but trends weren't limited to massive shoulder pads with sizeable hair to match. It was in this era that people expressed themselves in any way they wanted and, at the heart of it all, was a celebration of the individual.

As a result, a new generation of fashion designers emerged. Buyers worldwide flocked to see London's creations and British designs were stocked in shops from New York to Tokyo.

It was on 19 October 1987 that Black Monday hit and everything changed. The American buyers turned their back on importing from the UK and many British designers struggled to make ends meet. So they forged new collaborations and paved the way for the modern fashion industry.

Sue MacGregor brings together the designers who established their careers in the 1980s.

Bruce Oldfield is known for dressing a wealth of celebrities, including Princess Diana.

Considered one of the most important milliners, Stephen Jones began his career in 1980, opening a hat shop in Covent Garden.

Betty Jackson launched Marks and Spencer's Autograph range, but her success goes back to when she was awarded the first of many accolades in 1985.

Wendy Dagworthy is a former fashion designer, turned academic, and now retired. In the eighties, her label could be found in Macy's and Saks and she helped to set up the first London Fashion Week.

Best known for presenting BBC's The Clothes Show, Caryn Franklin promoted new, emerging designers on the box as well as in i-D magazine.