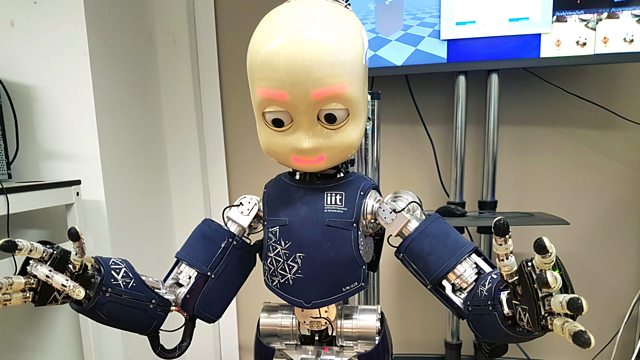 'Killer robots', self driving trucks and Buddhist funerals conducted by a robot have been in the news. Is it time for faith leaders to join the debate about how we use AI?

This week more than 100 of the world's top robotics experts wrote to the UN calling for a ban on the development of "killer robots" and the tech entrepreneur Elon Musk tweeted that artificial intelligence safety was 'vastly more a risk than North Korea'.

AI already changing our lives; from driver-less cars to caring for the elderly. Should the technology that drives AI be designed with a set of moral and ethical codes and how should it be regulated? Bob Walker reports from the Sheffield Robotics Centre.

The theologian Andrew Graystone is joined by the AI assistant Alexa as he ponders the possibility that one day we might be able to create a robot with human qualities.

The Bishop of Oxford Stephen Croft, Rabbi Moshi Freedman, anthropologist Beth Singler from the Faraday Institute and Kriti Sharma, VP of AI at Sage debate and discuss the application of AI and why its development needs to be considered within a moral and ethical framework.

Edward Stourton also asks the Bishop of Oxford why he believes faith leaders should have a say in the development and legislation of artificial intelligence.

Last week, a Russian court banned translations of the Jehovah's Witness bible. It's the latest in a string of rulings against the religious group, which the Russian courts have declared to be extremist. Anastasia Golubeva reports from Moscow.

A recently discovered manuscript gives us a glimpse into how fourth century churchgoers would have heard the gospels. The Latin interpretation was discovered in the library of Cologne Cathedral. Dr Hugh Houghton from the Dept of Theology and Religion at Birmingham University has been collaborating on the translation and tells Edward what they have found.

'Reformation Day' at The Proms; Moral equivalence; Why are Australian priests facing jail?