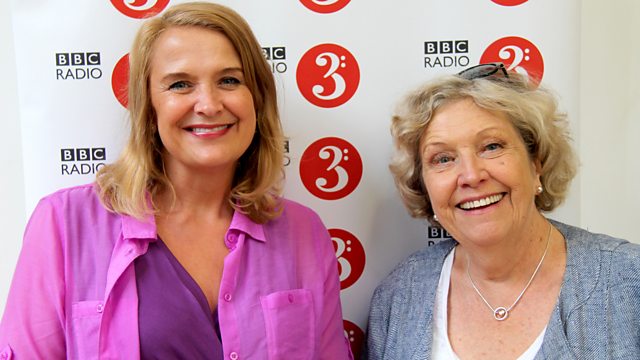 9.30am
Take part in today's musical challenge: listen to the clues and identify a mystery musical object.

10am
Sarah's guest this week is the actress Anne Reid. Anne has worked extensively in television, film and theatre, and is best-known for her roles in the hit TV series Last Tango in Halifax, and Dinnerladies. Anne trained at the Royal Academy of Dramatic Arts before making early TV appearances on The Benny Hill Show and Hancock's Half Hour. In 1961 Anne joined the cast of Coronation Street, a show that she would be part of 10 years. Her acclaimed performance in Roger Michell's film The Mother with Daniel Craig led her to being awarded the London Critics' Circle Award for Best British Actress and Best Actress at the Cinessonne European Film Festival. As well as discussing her life and work as an actress, throughout the week Anne shares her passion for classical music, choosing a selection of her favourite works.

10.30 Music on Location: Leipzig
This week Sarah explores music connected with Leipzig, focusing today on Felix Mendelssohn's time in the city, where he was Music Director of the Gewandhaus Orchestra and founded the Leipzig Conservatory.

Proms Artist of the Week: Mark Elder
Sarah's Proms Artist of the Week is Sir Mark Elder. Elder is one of the UK's most successful and respected conductors, and has been at the helm of the Hallé since 2000. Previously, Elder was Music Director of English National Opera (1979-1993) and has been Principal Guest Conductor of the City of Birmingham Symphony Orchestra, BBC Symphony Orchestra and London Mozart Players. He's also worked with orchestras such as the Berlin Philharmonic and Boston Symphony Orchestra, and in prestigious opera houses such as the Royal Opera House Covent Garden and the Metropolitan Opera New York. This Wednesday (23rd August) Elder brings the Hallé to the BBC Proms to perform Dvořák's Symphony No 9, 'From the New World'. Throughout the week Sarah will be featuring Elder's recordings with the Hallé of works by Debussy (orch. Colin Matthews), Richard Strauss, Wagner, Finzi and Delius.

The mystery object was the cornet, a brass instrument