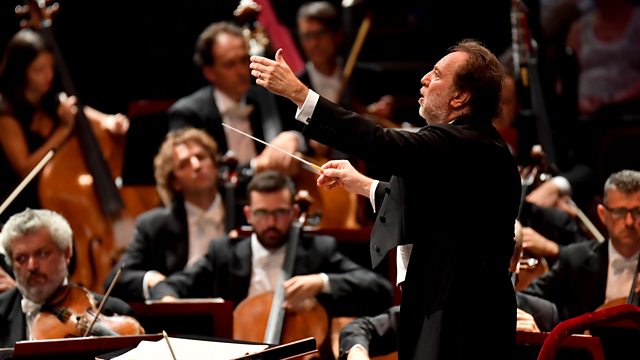 c.19:15 INTERVAL: Proms Extra
Writer and classicist Natalie Haynes talks to Matthew Sweet about Ancient Rome and how its ruins and history have inspired writers and artists through the centuries. Recorded earlier as a Proms Extra with an audience at Imperial College. Producer: Zahid Warley.

Riccardo Chailly returns to the Proms, this time as Music Director of the Filarmonica della Scala (Orchestra of La Scala, Milan), which makes its Proms debut. They bring with them a little piece of Italy in two of Respighi's Rome-inspired tone-poems. Richly vivid in orchestral colour, these works delight in the kind of huge sonorities that come into their own in the Royal Albert Hall. The concert opens with one of the great violin concertos - Brahms's joyous, virtuosic musical homage to his friend and mentor, the virtuoso violinist Joseph Joachim.

See all clips from Prom 54: Orchestra of La Scala, Milan, and Riccardo Chailly (3)