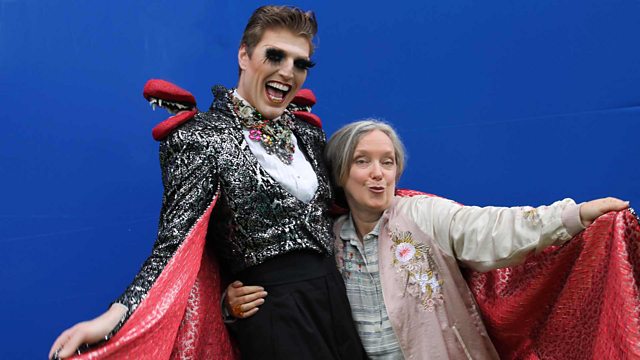 Comedian John Bishop talks about trialling material at the Edinburgh festival this month in preparation for a big autumn tour.

The godfather of American political satire, Barry Crimmins, talks about making his Edinburgh debut this year with his show Atlas's Knees.

We bring together some comedy shows about unusual subjects (kidney donation, depression, sight loss) to discuss how to make people laugh at situations where it's hard to see the comedy potential.

Harry Baker and Chris Read bring fast-paced spoken word and music from The Harry and Chris Show 2 and look ahead to future work on a musical called Trump's Women with actor and writer Lily Bevan.

With their corporation on the brink of collapse, four panicking businessmen have one desperate night to save their futures: we explore Enterprise, a new play from internationally acclaimed American playwright Brian Parks.

A dazzling explosion of songs, lashes and teeth, described by one critic as being like 'the evil love child of Liza Minnelli and Jim Carrey', we also have live music from Reuben Kaye.

Janice Forsyth is joined at the Edinburgh Festival by Dave Johns, star of Ken Loach's I Daniel Blake