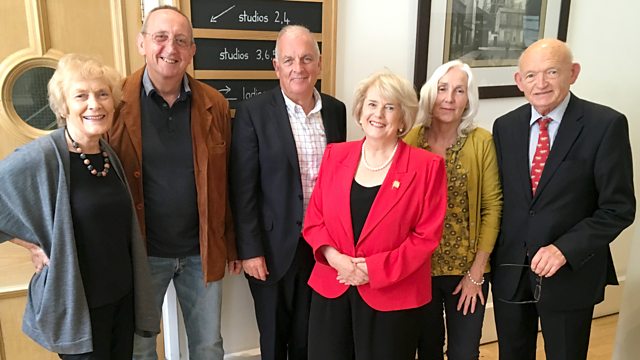 Sue MacGregor brings together trades unionists and editors from opposing sides of one of the most bitter and violent strikes in British industrial history - the Wapping dispute.

Sue MacGregor brings together trades unionists and editors from opposing sides of one of the most bitter strikes in British industrial history - the Wapping Dispute.

In the early 1980s, working on newspaper presses was noisy, dirty and dangerous. Machine minders suffered lung and hearing problems. But their wages and the camaraderie went a long way to compensate.

Rupert Murdoch owned The Sun, The News of the World, The Times and the Sunday Times and planned to move them all out of Fleet Street to Wapping in London's Docklands. The move was predicated on thousands of jobs losses and stringent new conditions for those remaining in post. Negotiations stalled, leading to the sacking of 5,500 workers and a 13 month dispute.

Discussing the events are Charlie Wilson, editor of The Times, who was dubbed "Scabbie Jock" by union members. He says they created a miserable and unhelpful atmosphere at his paper. Kelvin MacKenzie was the notorious editor of The Sun but bowed to union demands when they refused to print stories that offended their politics.

Baroness Brenda Dean was the General Secretary of the SOGAT union. She witnessed violence between police and demonstrators and had £10,000 of union funds sequestrated by News International. Marie Alvarado was a clerical worker for The Times and, like most of her colleagues, had no idea about Wapping almost until she went on strike. Paul King was a machine minder at The Sun. He was charged with assaulting a police officer, which he denied. He says the dispute led to the deaths of several colleagues.

With thanks to Linda Melvern's Wapping Archive.

Round the World Yacht Crew