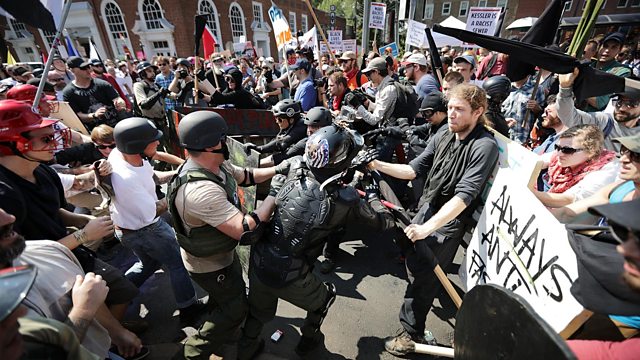 Events in the American city of Charlottesville - how much of a role have women had on both sides of the debate?

Protests in the American city of Charlottesville have dominated the headlines this week, but how much of this debate is fought along gender lines? We speak to Alethea Leventhal who was at the protests and discuss the issue with Maha Rafi Atal from Cambridge University and American journalist Laura Smith.

In the next of our series on the twelve finalists in the Woman's Hour Craft Prize in partnership with the Crafts Council and the V&A, we meet the jeweller Lin Cheung.

One hundred years since the Russian Revolution of 1917, Theresa Breslin has written a historical novel 'The Rasputin Dagger' charting the fear, violence and romance of the time. It features the Russian mystic Rasputin himself, along with the Royal family, but this is largely a book about normal people's bravery in a dangerous and unsettled time.

More from Women in One, a collection of audio snapshots in which Abigail Hollick talks to women of all ages and backgrounds about their lives. Abigail meets a woman at a bus station in Glasgow.

Gaming has long been considered a field of work - and play - dominated by men. But things are changing and many young women are finding a place for themselves in the industry. Claudia Thomas is a graduate of the Games Design and Art course at Winchester School of Art and a member of the networking community 'Women in Games'. Jay-Ann Lopez is the founder of an online collective called Black Girl Gamers.