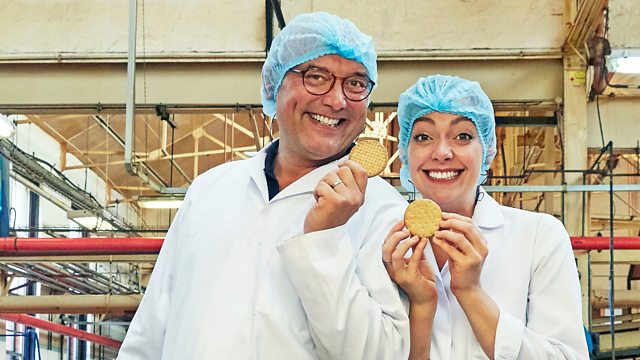 Inside the Factory Series 3
Episode 3 of 6

Documentary series. Gregg Wallace follows the production of chocolate digestives and discovers that we are all eating them the wrong way up.

Gregg Wallace is in London at Europe's largest biscuit factory, where they produce 80 million biscuits every day. He follows the production of chocolate digestives, from the arrival of 28 tonnes of flour right through to dispatch. Along the way, he discovers that the biscuits are shaped by a bronze roller costing up to ten thousand pounds, and that the chocolate is added to the bottom not the top of the biscuits, meaning we are all eating them the wrong way up.

Meanwhile, Cherry Healey is on the trail of that chocolate. At the refinery in Manchester, she learns that it is transported in heated lorries kept at 50C to stop it solidifying on its way to the factory. She also discovers that this is the most expensive ingredient, at around £2,000 per tonne. And she is in Nottingham University's sensory lab, where she finds scientific proof that dunking your biscuit improves its flavour and that tea is the best liquid to dunk in. Cherry takes to the streets to see if that stacks up in the real world.

Historian Ruth Goodman investigates the link between biscuits and digestion. She finds references in Samuel Pepys's diary to biscuits being a cure for flatulence and digestive discomfort and discovers that in Victorian times it was thought that biscuits could cure everything from typhoid to scarlet fever. She also takes a look at an antique biscuit baked at the beginning of the 20th century - one of Huntley and Palmer's notorious army biscuits. These dry hard biscuits were supplied as rations to five million British soldiers on the front line in the First World War.