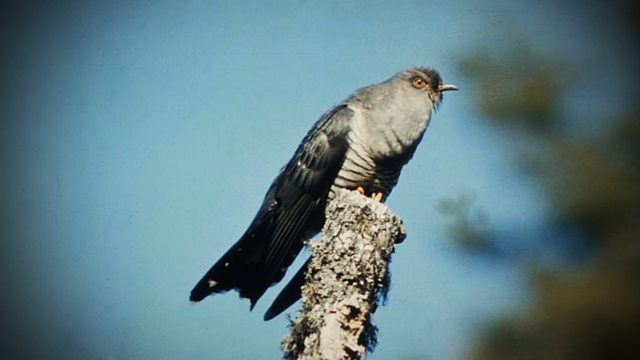 Summer is icumen in - loud sing cuckoo. We love the bird as a harbinger of spring and fear it for its unsettling parasitism. Brett Westwood explores the cuckoo.

We know the cuckoo for its song and think of it as the harbinger of spring. But we also know it as a rascally bird that abandons its young to the care of unwitting foster parents. Such a double life has ensured that the cuckoo has had a substantial place in the culture of all the countries across Europe and Asia where it comes to breed. In addition, observers, natural historians and scientists have long puzzled over the bird's secretive behaviour and habits - how do they do what they do, where do they go when they are not here, why are we losing them in England? Brett Westwood in the company of various field workers who have spent lifetimes trying to figure out cuckoos explores the rich and tangled life of the bird. With Nick Davies, Jenny York, Mark Cocker, and Chris Hewson and a gone-cuckoo song by Hanna Tuulikki.

Mark Cocker is a naturalist and author of 'Claxton: Field Notes from a Small Planet', 'Birds and People', which was a collaboration with the photographer David Tipling, and the New Angle Prize-winning 'Crow Country'.

In 2016, he was awarded an Honorary Doctorate of Literature from the University of East Anglia, where he has recently placed his archive.

Nick Davies is Professor of Behavioural Ecology, the study of how behaviour evolves in response to selection pressures from ecology and the social environment, at the University of Cambridge.

His current work focusses on the interactions between cuckoos and their hosts, including: how cuckoos trick their hosts and how the hosts defend themselves against cuckoo parasitism; how cuckoo trickery and host defences co-evolve; how cuckoo chicks manipulate hosts when they beg for food; how hosts vary their costly defences in response to levels of parasitism, by both individual and social learning.

You can hear Nick's interview with Jim Al-Khalili on The Life Scientific, broadcast on Radio 4 and you have to take a look at the migration patterns of 'Nick' the cuckoo named after him by the British Trust for Ornithology.

Hanna Tuulikki is an artist, composer and performer based in Scotland, who specialises in working with voice to create ethereal spaces that unearth ‘mnemonic topographies – the land encoded in the song, the lore embedded in the land’.

In research-led, multi-disciplinary projects she considers how sound, gesture, and language frame our connection with our environment, the more-than-human, and each another, re-imagining resonant stories of contemporary relevance.

Recent works include Tidesongs; Cloud Cuckoo Island; Sourcemouth: Liquidbody; Women of the Hill; Sing Sign: A close duet and Away with the Birds.

Photograph: Away with the Birds, Hanna Tuulikki, photograph by Alex Boyd, 2014

Jenny York's first word was 'spider', and ever since she has been fascinated by the natural world.

Her current position is a NERC-funded Associate Research Fellow based at the University of Cambridge and her research focus is studying co-evolution between common cuckoos and their hosts. Photograph: Dom Cram