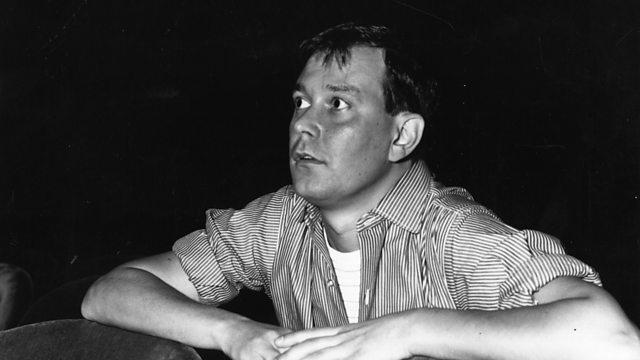 An exploration of the life and legacy of the playwright Joe Orton whose plays, Entertaining Mr Sloane, Loot, and What The Butler Saw, challenged British theatre in the 1960s.

Leonie Orton, Joe Orton's youngest sister, has written a memoir of her life, I Had It In Me, in which she describes the childhood in Leicester she shared with Joe Orton and how his death led her to question and change her life. She meets Samira at the Pork Pie Library which she and Joe used to regularly visit.

Sally Norman, co-founder and co-director of Soft Touch Arts in Leicester, and her assistant Jenna Forbes, discuss their new community arts exhibition Breaking Boundaries: Joe Orton and Me which is on at Soft Touch Arts until 8 September.

Theatre critic John Lahr, author of the acclaimed Joe Orton biography, Prick Up Your Ears, discusses Orton's skill and significance as a playwright.

The artistic director of Curve theatre, Nikolai Foster, talks about his experience of staging Joe Orton's final play, What The Butler Saw, at Curve earlier this year.

Leonie Orton and Samira Ahmed at the Pork Pie Library.

Leonie Orton’s memoir, I Had It In Me, is available now.

What the Artist Saw: Art Inspired by the Life and Work of Joe Orton, is on at the New Walk Museum and Art Gallery in Leicester until 22 October

Crimes of Passion: The Story of Joe Orton is on at the National Justice Museum in Nottingham until 1 October

Breaking Boundaries: Joe Orton and Me is on at Soft Touch Arts until 8 September.