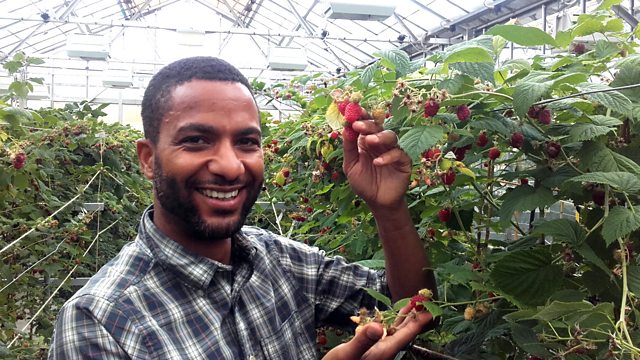 Ellie Harrison crosses the Firth of Forth to witness the seasonal spectacle of guillemots, kittiwakes and puffins jostling for position on the Isle of May.

Our Scottish journey starts just off the mainland - on the Isle of May. It's home to the largest puffin colony on the east coast of Britain at this time of year. Ellie Harrison crosses the Firth of Forth to see the seasonal spectacle. With guillemots, kittiwakes and puffins all jostling for position on the islands ledges and perches, Ellie finds out from David the island manager about the work they do to make it a five-star stay for seabirds.

Sean Fletcher discovers Fife's importance as a (soft) centre of excellence when it comes to fruit growing. He looks at the history of the connection between fruit and the east coast of Scotland. Sean then plays 'scientist' at the James Hutton Institute, a lab that has been creating a raspberry-breeding programme to produce new breeds for local growers. He visits the 'crumbly fruit house', checking that new breeds hold up to picking without crumbling, and then asks fruit breeder Nikki Jennings just how Fife can create raspberries with a fuller flavour and less sugar than its southern counterparts.

Adam takes to the skies with Roger Nock from Ordnance Survey to map his field margins, and Tom Heap looks at the unseen side of TB - its effect on goats, asking why the disease isn't being dealt with the same rigour as it is in our cattle herds.