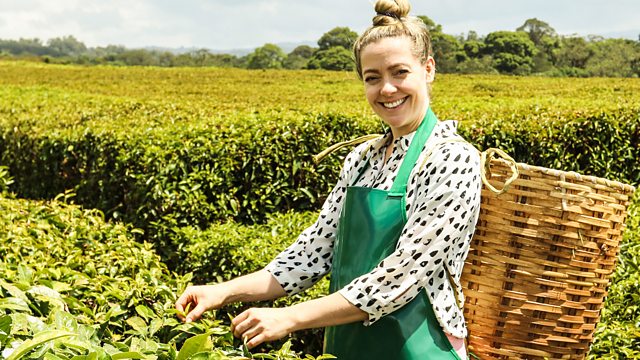 Inside the Factory Series 3
Episode 1 of 6

Documentary series. Gregg Wallace receives some tea leaves from Kenya and follows them through the factory that produces one quarter of all the tea drunk in Britain.

Gregg Wallace receives a load of tea leaves from Kenya and follows their journey through the factory that produces one quarter of all the tea we drink in Britain. Gregg turns his 20-tonne batch into 6.9 million bags. Along the way, he discovers that there can be up to 20 different teas in your bag and that the recipe for the blend is altered every day, measured against a standard created in 1978.

Meanwhile, Cherry Healey discovers the secrets of the tea leaf in an African tea-processing plant. She learns that 40% of each leaf is made up of chemicals called polyphenols. She is surprised to find that white, green and black tea are all made from the same leaves. She also discovers that the bag surrounding your tea is not ordinary paper, but a highly engineered fabric made up of hemp, wood and polypropylene. She watches as a 60-kilometre-long roll is produced. And she gets some scientific tips on making the best possible cup of tea with a tea bag.

Historian Ruth Goodman investigates tea adulteration. In the 19th century, there were eight separate factories in London which existed solely to dry and recolour used tea leaves. She discovers that it was 'honest' John Hornim who put that right and ensured we could trust our tea. She also finds that in the military during the Second World War, armoured divisions had to leave the safety of their tanks to brew up - a habit that resulted in many casualties. She climbs on board a modern-day tank to make a cup of tea with a boiling vessel, the innovation that solved this problem.