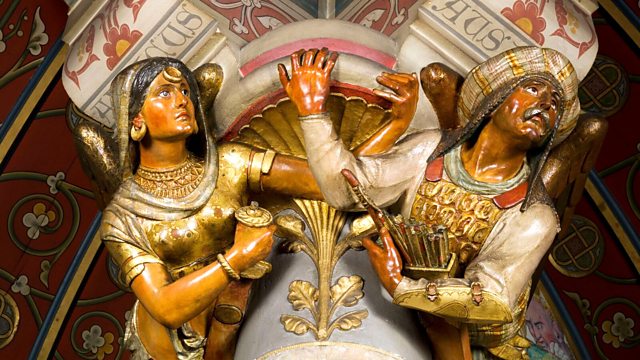 Bute: The Scot Who Spent a Welsh Fortune

Documentary telling how the fabulously rich Scottish aristocrat, the 3rd Marquess of Bute, spent a Welsh fortune and left a dazzling architectural legacy in Scotland and Cardiff.

John Patrick Crichton Stuart, the 3rd Marquess of Bute, was one of the richest men in the British Empire in the late 19th century. With an annual income in excess of £150,000 - around £15 million in contemporary currency - he pursued his passion for architecture with a vengeance. Narrated by Suzanne Packer, The Scot Who Spent a Welsh Fortune delves into the extraordinary world of Lord Bute and reveals what connects the small Scottish island of Bute to modern Cardiff.

Bute was one of the most unconventional mavericks of the Victorian age, passionate about the past but also far ahead of his time - a blue-blooded aristocrat, who supported women's rights and striking miners, a Welsh-speaking intellectual Catholic who was also a ghost hunter. Above all, Bute was a fabulously rich and visionary creator of great architecture including the Gothic fantasy of Cardiff Castle, and Castell Coch - the fairy-tale castle.

The 3rd Marquess got his hands on his fortune at the age of 21, but already when he was 18, he met the outrageous and eccentric Gothic designer William Burges. It was the start of a lifetime's collaboration with artists and architects which would pour Bute's original mind into fabulous buildings in an astonishing variety of styles.

William Burges transformed Bute's medieval Cardiff Castle into a Welsh Camelot. Within fantasy towers, he created lavish interiors, rich with murals, stained glass, marble, gilding and elaborate wood carvings. Then Bute gave Burges the dream commission - to restore the 14th-century Welsh ruins of Castell Coch near Cardiff as a summer party house for the family. He recreated, from a heap of rubble, a fairy-tale castle. The interiors were elaborately decorated, with specially designed furniture. It even had its own vineyard - the first in Britain.

Bute's next target was the family ancestral seat Mount Stuart on the Isle of Bute, where he was born. When it was destroyed in a fire, Bute embarked on a huge new Gothic palace, driven by his own taste and design skills.

The footprint of the Bute family still looms large in Cardiff. The Bute obsession with Gothic style entered the architectural DNA of Cardiff's domestic buildings. The green lung at the city's heart - Bute Park - was the family's back garden, and Cathays Park, one of the finest civic centres in Britain, was sold to the city by Lord Bute on condition it would be used for cultural, civic and educational purposes. The Bute family names are everywhere - Bute Street, Mount Stuart Square, after the family estate in Scotland, and the now demolished Ninian Park Football Ground, after the 3rd Marquess's second son, who became MP for Cardiff and died in the First World War.

Bute died in 1900 aged only 53 after a protracted illness and was buried in a small atmospheric mausoleum in the family graveyard on the shores of the Isle of Bute. His heart was buried on the Mount of Olives in Jerusalem. But his greatest memorials are his Welsh and Scottish grand designs.

See all clips from Bute: The Scot Who Spent a Welsh Fortune (5)

High society! The drug-inspired smoking room of the richest man in the world 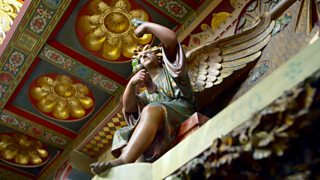 John Patrick Crichton-Stuart, 3rd Marquess of Bute, had quite the trippy smoking room.