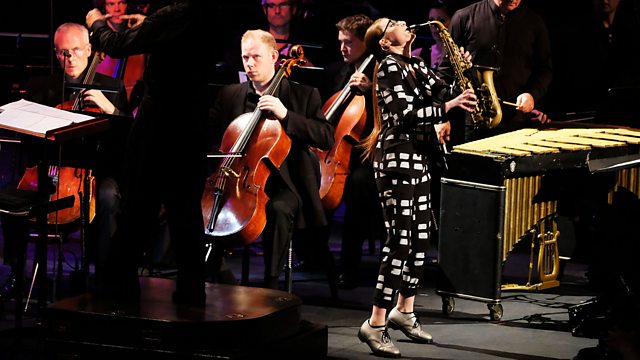 Presented by Katie Derham from the Royal Albert Hall, London.

Overture to Goodbye, Mr. Chips
Raider's March from Raiders of the Lost Ark
Main Theme from Jaws
March from Superman

Suite for Cello and Orchestra from Memoirs of a Geisha - Sayuri's Theme
Viktor's Tale from The Terminal
Dartmoor, 1912 from War Horse

Hedwig's Theme from Harry Potter and the Sorcerer's Stone
A Child's Tale: Suite from The BFG
Flying Theme from E.T. the Extra-Terrestrial

Theme from J.F.K
Prayer for Peace from Munich
Dry Your Tears, Afrika from Amistad
Devil's Dance, from The Witches of Eastwick
Escapades (No. 3) for Alto Saxophone and Orchestra from Catch Me if You Can

Winner of five Academy Awards, 22 Grammy Awards and seven BAFTAs, John Williams is among the greatest of film composers. His scores for Star Wars, Harry Potter, E.T. The Extra-Terrestrial and the Indiana Jones films have made him a household name.
The BBC Proms celebrates his extraordinary achievements in a concert to mark Williams's 85th birthday. Keith Lockhart - a long-time colleague of Williams at the Boston Pops Orchestra - conducts the BBC Concert Orchestra in an evening featuring excerpts from the composer's best-loved scores, as well as some lesser-known gems.

See all episodes from Proms 2017 Repeats