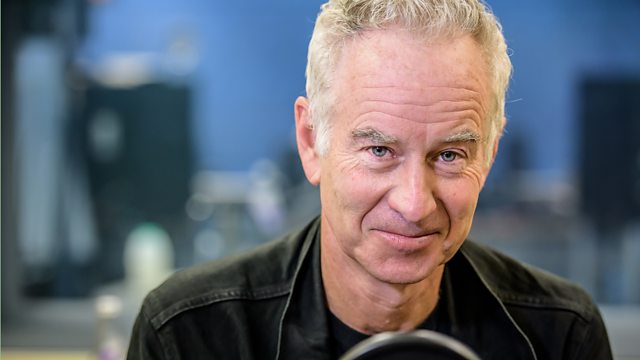 Kirsty Young's castaway is the tennis player and commentator, John McEnroe. He won three singles and five doubles Wimbledon titles, four singles and four doubles at the US Open and was ranked number one in the world for four consecutive years in the 1980s.

John McEnroe grew up in New York and didn't pick up a tennis racquet until the age of eight, but his talent was quickly spotted and he began to compete in junior tournaments. In 1977, aged 18 and between high school and university, he qualified for the main draw at Wimbledon and reached the semi-finals where he lost to Jimmy Connors. By the end of the tournament his on-court behaviour - shouting, haranguing umpires and abusing his racquet - earned him the nickname 'Superbrat'.

He made his first Wimbledon final against Bjorn Borg in 1980. In one of the finest matches in history, despite winning a tiebreak 18-16 to win the fourth set, he lost the match. He beat Borg the following year to win his first Wimbledon singles title. 1984 was the best year in John's career: he won 82 out of 85 matches he played, but it was also the year when he was beaten at the French Open by Ivan Lendl, who replaced him as number one.

John married the actress Tatum O'Neal in 1986. They divorced in the mid-1990s and he has been married to the singer Patty Smyth since 1997. Since retiring in 1992, in addition to his role as tennis commentator, he has been a coach and runs his own tennis academy. He still plays in tennis tournaments.

See all clips from John McEnroe (2)