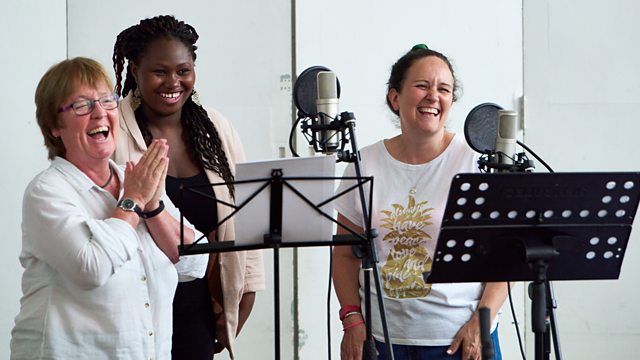 Sexually exploited children are being refused compensation by a Government agency on the grounds they 'consented' to their abuse, reveals a charity coalition. According to a freedom of information request child sexual abuse victims as young as 12 are being denied compensation by the Criminal Injuries Compensation Authority, even if their attackers have been jailed. We hear from a father whose son was denied compensation and the impact that had on him; and Alison Worsley from Barnardo's.

Migrant mothers, who may be refugees, asylum seekers, refused asylum seekers, women who've been trafficked or overstayed their visa, are getting help in an unusual way. To bring them out of themselves, and reduce feelings of isolation, two London charities, a musical one called the Irene Taylor Trust, and Praxis, which is for migrants and refugees, are helping them to create lullabies. Once written the women's words are put to music by The Royal Philharmonic Orchestra.

More and more global research suggests women who take the contraceptive pill have a higher risk of being depressed and prescribed anti-depressants. Is there enough awareness around the different types of contraception and their impacts? Three young women share their experiences

And as the Women's European Football Championship gets underway, we look ahead to the England V Scotland game tomorrow with 5 Live Sports Reporter Caroline Barker and former England goalkeeper, Rachel Brown-Finnis.