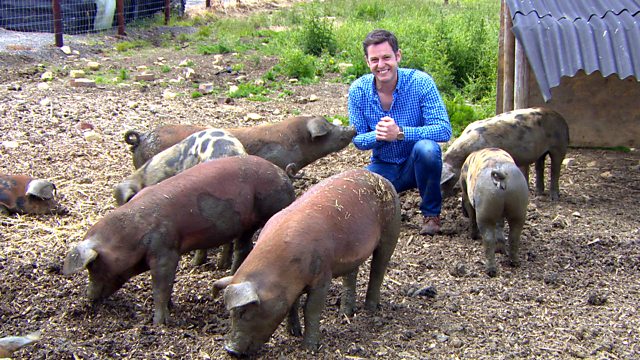 Ellie joins a family who have set up a traditional cottage industry producing natural elderflower cordials and presses, and tracks lesser horseshoe bats in Worcester.

Elderflowers are one of nature's sweetest treasures and the hedgerows are currently heaving with them. Ellie joins the Rollett family who have set up a traditional cottage industry producing natural cordials and presses, using the elderflowers on their doorstep.

When his dad decided to retire from farming, Paul Hopkins took over his farm. An electrician by trade, Paul wasn't entirely sure what to do with it. But, over a game of skittles, a farming friend convinced him to buy some pigs! And the Little Beckford Pig Association was born. It's a community farming project where members 'buy' a pig and help rear it, until it's ready to be slaughtered.

Worcester Cathedral is home to a very rare population of lesser horseshoe bats, thought to be the only urban population in the country. At this time of year, the summer roost is full of females gathered together to give birth and raise their young. Along with an army of volunteers, Ellie ventures out after sunset. Positioning themselves around the roost, along the River Severn and into the suburbs beyond, they use bat detectors to discover where the bats are going.

Adam's in the Peak District to meet a vegetarian farmer who has decided to send his beef cattle off to an animal sanctuary in Norfolk rather than the slaughterhouse.

While drinking beer and playing skittles in his local, electrician, Paul Hopkins and his friends came up with the Little Beckford Pig Association. Paul had bought 4 acres from his Dad and was wondering what to do with it. So he purchased some piglets and started a pig share scheme. It's a community-farming project where members ‘buy’ a piglet and help rear it, taking it in turns to feed and clean out the pigs until they are ready to be butchered and enjoyed by the community.

You may have heard of neonicotinoids, they're the insecticides banned on flowering crops across the EU for fear that may harm bees. Well now the biggest experiments ever to find out if that is true or not have been completed and Tom Heap gets a first look at the science. That's not the end of the story, now Europe is deciding whether they should be banned on all crops, but would that be an environmental triumph or a blight on agriculture?
Find out more about neonicotinoids and bees

They’re one of nature’s sweetest treasures and the hedgerows in early summer are heaving with them, yes we're talking Elderflowers. Ellie joins the Rollett family as they handpick the harvest from the slopes of Bredon Hill. They’ve set up a cottage industry producing natural cordials and presses, using the elderflowers on their doorstep. And Worcestershire’s got some whoppers!  Just down the road lives horticultural wizard Edmund Brown. Ed holds the National Collection of Elderflowers and he explains to Ellie the science behind his crossbred varieties that can grow flowers as big as dustbin lids!

Make your own elderflower cordial

Matt is back on the farm with electrician turned farmer, Paul Hopkins. Matt sees how Paul has used his skills as a sparky to open up his farming to all of his investors. He’s installed CCTV in the pigpen!  Using a special access code, all the members of the Little Beckford Pig Association can now tune in online and see how their pigs are getting on. This is real life Pig Brother!

Horse pinchers, thunder beetles, oak ox; stag beetles go by several names. They’re one of our largest but most rare insects, emerging from their underground lairs for a few weeks of the year as the warmer evenings draw them out. On the banks of the River Avon, at the wild Rough Hill nature reserve, Margherita Taylor meets Laura Bower, of People’s Trust for Endangered Species who explains how these beasties spend much of their lives underground. Margherita goes onto find out about their favourite foods, but soon realises the search for a mate is more important to the beetles than munching avocado!
Do your bit to help stag beetles

Adam is off to meet Jay Wilde who's been working with both beef and dairy cattle on the family farm for as long as he can remember. But he's also been a vegetarian for 25 years. Jay tells Adam how after meeting up with the Vegan Society he decided to square this circle by giving away his entire herd for free to a sanctuary where they can live out their lives to the full and changing the farm to market garden and arable produce. Adam helps load up the herd for the last time as Jay finally wishes his cows farewell.
Meet the Vegan Society

Ellie is at Worcester Cathedral - home to a very rare population of lesser horseshoe bats; thought to be the only known urban population in the country. At this time of year, the summer roost is full of females; gathered together to give birth and raise their young.  Their foraging area is key to the bats’ survival and for that reason, it needs protecting. So Cody Levine and Mike Glyde, Worcester’s answer to Batman and Robin, along with Ellie and an army of volunteers from the Worcestershire Bat Group, venture out after sunset armed with bat detectors to discover where the bats are going to get their food.
Find out how you can help bats in your area

From piglet to cutlet

Matt meets some of the members of the Little Beckford pig-share scheme including Kate Marchant, a local nursery school teacher. She often brings her nursery school group to see the pigs. Not only do they administer belly-rubs or ‘pork scratchings’ to the pigs, but they also learn about the cycle of pig to pork and farm to fork.