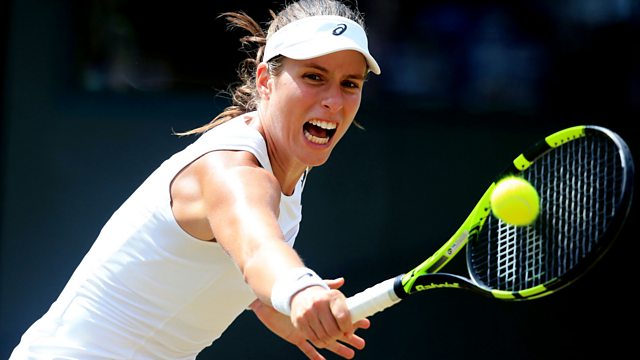 Women's tennis, Lily Collins on anorexia in To The Bone, campaigner Rachel Clarke on the junior doctors' dispute and female Nazi pilots in World War II.

Johanna Konta will be the first British female singles' semi-finalist for 39 years when she plays Venus Williams at Wimbledon today. We're sticking our necks out and bracing ourselves because we're posing the controversial question: is women's tennis boring? Right. There. We've done it. Some claim it is more boring because of longer rallies and fewer sets, and there are always grumbles about the grunts and squeals. But this year there's been high profile support for women's tennis, with Andy Murray saying that there must be a way to split men's and women's matches fairly across the show-case courts.

Golden Globe nominated Lily Collins is the star of a new Netflix original film 'To the Bone.' The film revolves around Lily's character Ellen, who struggles with anorexia. It's a health condition that's close to Lily's heart and is an issue we've been discussing recently. Lily talks about the film, its impact on her and what it's like to grow up daughter of a famous musician, Phil Collins.

Junior doctors and their long running dispute with the government were rarely out of the news last year. One of those at the forefront of this campaign was Rachel Clarke, a journalist turned doctor who found herself fighting on two front lines: on the ward and in politics. She joins Jenny to talk about being a hospital doctor, a full time activist and working mum.

Two of the most remarkable women in the history of aviation were pilots for Nazi Germany - Hanna Reitsch, a committed Nazi, was the first woman in the world to fly a helicopter while Melitta von Stauffenberg was an aeronautical engineer daredevil who had supported a plot to kill Hitler. Author Clare Mulley discusses these pioneers who served the Third Reich.

If you need help with eating disorders, advice and support is available.