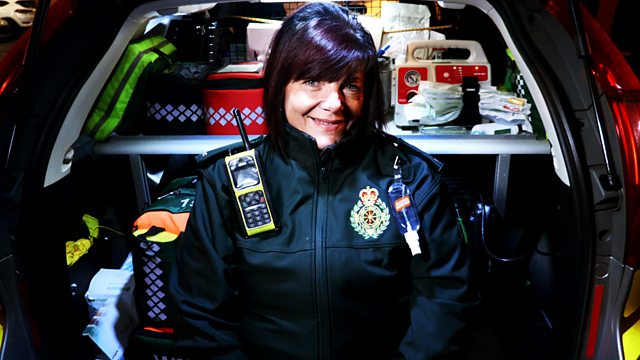 Series following the work of the West Midlands Ambulance Service's mobile teams. Ste Hill visits a factory where a man is suffering from a suspected anxiety attack.

Rapid response paramedic Ste Hill visits a factory where a man is suffering from a suspected anxiety attack and is in danger of passing out through hyperventilating.

Paramedic Mike Duggan is out on patrol in Birmingham city centre when he is called to an incident where a homeless man has fallen over and sustained a massive cut on his forehead - Mike has to work out what the man has taken in terms of drugs and alcohol before deciding on a treatment. The same patient is then attended to just eight days later by Mike's colleague Cameron McVittie - having once again fallen over in the street.

We meet Freda, a plucky 85-year-old who has a few feisty words for the ambulance team of Tracey and Dan who treat her after she has fallen in her kitchen and suffered a hefty cut to the head.

The BASICs doctors deal with the aftermath of an epileptic fit, the MERIT mobile trauma unit travel to the scene of an accident where a young child has been clipped by a car, and rapid response paramedic Kathryn Davies deals with Melvin who has suffered from a seizure and cut his head.

See all episodes from A&E on the Road