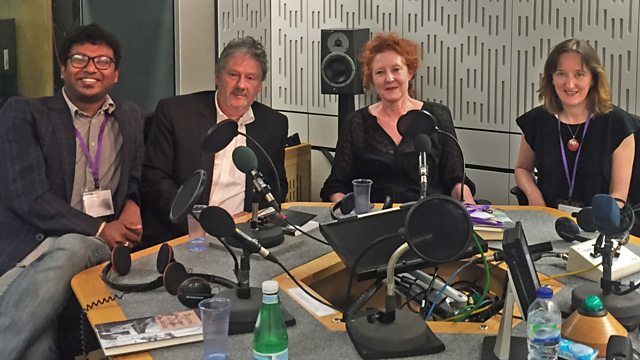 Presented by Catherine Fletcher. With a discussion about the Punjabi Romeo and Juliet held at the 2017 Bradford Literary Festival and Jonathan Dollimore talking about his memoir.

The Punjabi "Romeo and Juliet" is explored at Bradford Lit Fest plus New Generation Thinker Catherine Fletcher talks to Jonathan Dollimore about his memoir and the influence of the Centre for the Study of Sexual Dissidence which he set up at Sussex University. The Greek poet Sappho is championed by Professor Margaret Reynolds as part of Queer Icons - a project to mark the 50th anniversary of the decriminalisation of homosexuality in which 50 leading figures choose an LGBT artwork that is special to them. And Rohit Dasgupta from Loughborough University talks about his research published in Digital Queer Cultures in India.

You can find more information about Queer Icons on the Front Row website.
You can hear Catherine Fletcher chairing a Free Thinking discussion about Women's Voices in the Classical World recorded with Bettany Hughes, Paul Cartledge and Colm Toibin at the Hay Festival on the Free Thinking website. http://www.bbc.co.uk/programmes/b08rsrlt

You can find the BBC's Gay Britannia season of programmes on radio and tv collected on the website. They include documentaries, Drama on 3, episodes of Words and Music and more editions of Free Thinking including Philip Hoare on Cecil Beaton, Jake Arnott on Joe Orton and Sophie-Grace Chappell on Plato.