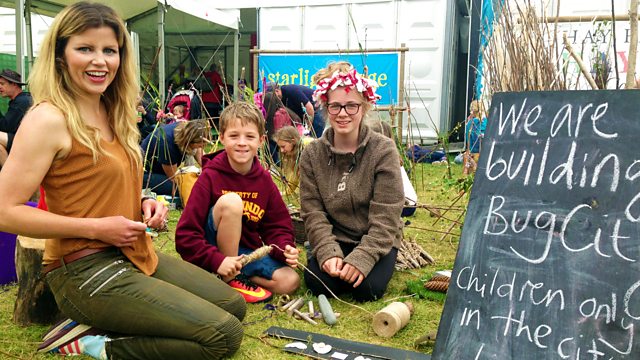 At the Hay Festival, Ellie Harrison goes on a wildlife safari and Sean is on a literary adventure with a group drawing inspiration from the Wye Valley countryside.

Ellie Harrison and Sean Fletcher are at the Hay Festival, one of the UK's biggest literature and arts festivals.

Ellie goes behind the scenes to meet some of the writers and artists, the organisers and many of the thousands of visitors who flock here each year. She then heads out to the country for a special wildlife safari inspired by one of the books on show. She also joins the team spotting and tagging adders using radio tracking devices.

Sean is on a literary adventure of his own with a group drawing inspiration from the beautiful Wye Valley countryside. He also meets some local food producers at the festival, including one who's putting a whole new spin on ice cream.

Adam Henson looks at how new technology can help in the fight against drought, and John Craven is here with new news of this year's Countryfile Photographic Competition.

Organic food has never been more popular. The market for it continues to grow as across Britain more and more people are forking out to make sure what they eat is organic. So why is it that the amount of land in the UK farmed organically is falling? Tom Heap finds out.

Call of the Wild

John Craven is joined once again by Deborah Meaden from the BBC’s Dragons' Den, and wildlife cameraman Simon King, for the  launch of this year’s Countryfile Photographic Competition.
The theme for the 2017 competition is ‘Call of the Wild’ and John and the others will be judging your entries later in the year. But, to get you in the mood, John, Deborah and Simon spent the day at the beautiful RSPB Arne nature reserve in Dorset. There’s a variety of wildlife on display in a stunning setting.  Simon’s experience as a wildlife cameraman comes in handy as he shows the others some handy hints and tips, but capturing the 'Call of the Wild’ presents a real challenge to our judges.

We celebrate the 30th anniversary of the Hay-on-Wye Literary Festival. This year’s theme is woods and trees and Ellie meets Hannah Marshall from the Woodland Trust who tells her about the launch of their Tree Charter. Ellie soaks up the atmosphere and meets with founder Peter Florence who reveals the origins of the Hay Festival and the impact it has had in such a rural setting. And there’s plenty on offer for the young minds too! Ellie gets to grips with the children and illustrator Sarah Dean in the ‘make & take’ corner where natural materials are the tool for imagination.

Learn more about the festival

The market for organic produce is booming, but the amount of farmland here in the UK actually being farmed organically has fallen by a third in the last seven years. So what's gone wrong? Tom Heap meets a farmer who felt he had to give it up and then catches up with the Soil Association to find out what's being done to bring our farmers back into the organic fold.

At the prestigious literature festival on the very edge of the Brecon Beacons National Park, Sean meets the next generation of writers who've been picked from hundreds of applicants to be part of the Beacons Project, a residency workshop for young talent at Hay Festival. Sean joins the group on a trip with local author Tom Bullough as they venture up the hill to Hay Bluff and into the wilderness of the Brecon Beacons as they explore their ability to write about the landscape.

Ellie takes a look around the Hay Festival and invites Martin Brown, author and illustrator of the book ‘Lesser Spotted Animals’, on a special safari of the the Wye Valley. Armed with sketch books, pencils and a keen eye for the lesser seen they head down to Mabley Farm in Woolhope Dome on a wild drawing safari. They meet farmer and ecologist Mark O’Brien who has taken a different approach to land management in favour of habitats for wildlife. Top of their lesser spotted safari list are the Wild Honey Bee, the Wood White butterfly and the Hazel Dormouse.

Adam's experimenting with technology this week as he sends a drone up over his crops for the first time. Normally used at building sites, the drone can tell Adam how his crops are faring in terms of disease, how they're getting through the dry spring and can target weeds. But can the drone beat a farmer actually walking his fields and prove the old saying: "The best fertiliser is a farmers footstep."

Back at the Hay Festival, Sean meets two producers who've been at the festival since the very start, 30 years ago, and who also took a bold and brave move. First, Sean meets the Morgans who were one of the first in the UK to switch from sheep to deer farming and tastes their award winning venison burger. For desert, Sean tries Shepherd’s, the well known sheep’s milk ice cream from Hay-on-Wye.

Away from the hustle and bustle of the Hay Festival, Ellie heads out on another wildlife quest, this time to find UK’s only venomous snake on the hills of Herefordshire. She meets ecologist Nigel Hand who reveals his method of tracking adders using radio telemetry technology. Nigel has 10 snakes radio tagged on the site and Ellie joins him on the search under the bracken. Back at the Hay Festival Ellie and Sean have been invited on stage to reveal this year’s Countryfile Children in Need calendar fundraising total, and it's quite a surprise!