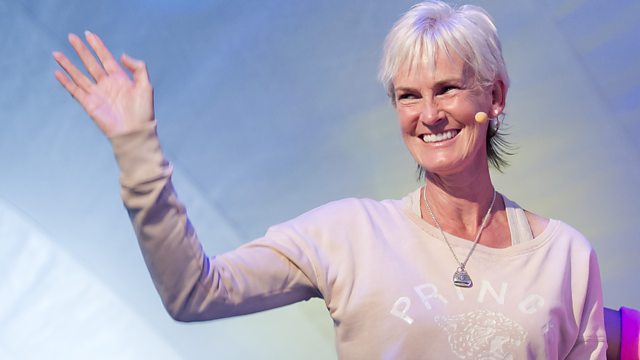 Judy Murray talks about her family and their tennis story - and her subsequent projects from dancing the Viennese Waltz at the Tower Ballroom, Blackpool, to heading the women's tennis coaching initiative She Rallies.
Jamie Chadwick has just become the youngest British female racing driver to sign for a Formula 1 feeder series team. She explains how she got into the sport and became the first female and youngest racing driver to win a British GT championship.
Wolfgang Puck has catered to the Oscars for 23 consecutive years. With the 35th anniversary of his flagship restaurant Spago this year, he recalls his culinary career.
JP Devlin meets James Shepherd-Barron, the son of the inventor of the ATM, which celebrates it's 50th anniversary this week.
The prize-winning author Adam Nicolson describes his childhood at Sissinghurst and how his visits to the Hebridean Islands sparked his fascination with seabirds.
And the actress and singer Ute Lemper shares her Inheritance Tracks: Where Have All The Flowers Gone, performed by Marlene Dietrich, and The Rose performed by Bette Midler.

Knowing the Score: My Family and Our Tennis Story is out now.
Wolfgang Puck is hosting Spago pop-up at CUT at 45 Park Lane until 1st July.
The Seabird's Cry, The Lives and Loves of Puffins, Gannets and Other Ocean Voyagers, is out now.
Ute Lemper will be performing the album 9 Secrets at the Cadogan Hall on 15th September; and will also be touring her 'Last Tango in Berlin - The Best of Ute'.