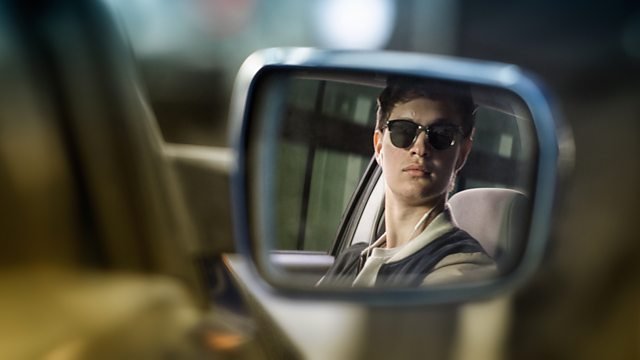 After the very British flavours of the Cornetto Trilogy: Shaun of the Dead, Hot Fuzz and The World's End, director Edgar Wright has made a very American heist movie. Baby Driver tells the story of a young getaway driver who listens to music constantly to sound track his great escapes and combat tinnitus. The cast includes Kevin Spacey, Jon Hamm, Lily James and Jamie Foxx, but as Kirsty Lang found out, music is the big star. She spoke to the director about car chases, Star Wars and of course killer tracks.

In the first of a new Front Row series, Hooked, in which actors, singers and writers discuss their current cultural obsessions, actor Julie Hesmondhalgh reveals her love for Manchester, poet Tony Walsh, and Oasis.

Earlier this month the artist Sam Durant gave the rights to his controversial artwork, Scaffold, to the Dakota community in Minneapolis. The artwork had been bought by the Walker Art Centre in Minneapolis but after its installation in their sculpture garden there were protests from the local Native American community who said the work trivialised the hanging of 38 Dakota men by the US Army in 1862 - the largest mass execution in US history. Svetlana Mintcheva, Director of Programmes at the National Coalition Against Censorship, explains why the NCAC believe that this case sets an 'ominous precedent' in the world.

The singer and writer Alba Arikha's father was the painter Avigdor Arikha, her mother is the poet Anne Atik and her godfather was Samuel Beckett. She talks to Kirsty about her memoir, Major/Minor, which recounts growing up in an artistic Parisian household in the 1970s, and sings a song from her album, Dans les Rues de Paris.

Baby Driver is in cinemas nationwide from 28 June, cert 15

Julie Hesmondhalgh on her love for Manchester, poet Tony Walsh and Oasis

Alba Arikha
Her memoir Major/Minor is out now in paperback