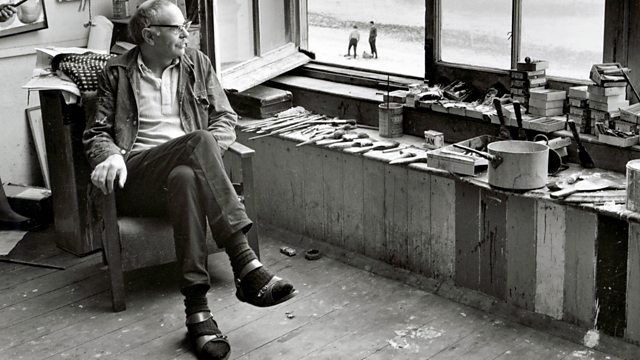 Art historian Michael Bird is in St Ives to explore the bond between two ground-breaking abstract artists. Terry Frost was a light bulb salesman whose family ridiculed his ambitions to become an artist. Patrick Heron was a well-connected aesthete whose parents nurtured his talent from childhood.

Despite their differences, the two men formed an unlikely and lifelong friendship, pioneering brilliant use of colour and space to become two of the most important abstract artists of their generation.

Through archive interviews, including some broadcast for the first time, Michael Bird revises their ground-breaking contribution to modern art.

Booker Prize winner A S Byatt describes why she choose Heron to paint her portrait. She also reveals that both men enjoyed watching Marilyn Monroe films together!

For Terry Frost, painting was about feeling, sensuality and movement. For Heron, the canvas was a space to explore radical technical and intellectual challenges.

But success was short-lived as their pioneering work was soon eclipsed by the American Abstract Expressionists. The parochial St Ives tag became a "dirty word" among Londoncentric art critics. Sales of Frost's work dried up while Heron rattled against the "cultural chauvinism" of the American "propaganda machine".

But both men continued to work, discover and innovate right up their deaths, within three years of each other.

As Tate St Ives prepares to open a new wing dedicated to the St Ives school, and plans for a major Heron exhibition are under way, Michael Bird asks why we should still be looking at Heron and Frost.

A Whistledown Production for BBC Radio.