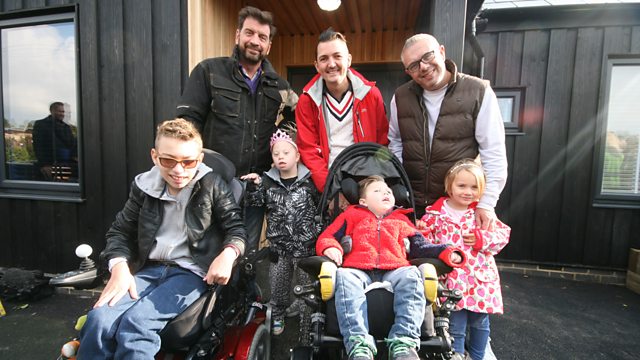 The Big Build - Isle of Sheppey

On the Isle of Sheppey in Kent, in a DIY SOS first, Nick Knowles and the team demolish a bungalow and try to build an entirely new home in just nine days.

The Isle of Sheppey in Kent is home to an extraordinary family - two boys and two girls brought together by two dads. Head teacher Garry and social carer Kyle first fostered then adopted four vulnerable children, three with complex special needs, because they wanted to give them the best life possible. Unfortunately their tired, crammed three-bed bungalow now threatens their family's future.

They desperately need space and dignity, but the only thing to do is to knock the entire house down and start again. Enter Nick Knowles and the team, who are taking on a DIY SOS first - and one of their most ambitious home builds ever. The team are going to demolish the bungalow and in just nine days build an entirely new bespoke five-bedroom home for this inspiring family. It is all thanks to the amazing goodwill, hard work and generosity of the local community and trades.

The two dads then fostered sisters Bella, who was six, and Phoebe, who was one. Bella has Down's syndrome, so when there was a hint that the sisters may be split up, they decided to offer a lifeline to both girls and applied to adopt.

Taking on four children with so many needs is a challenge for any family, but living in a tiny bungalow is another hurdle, and every room is bursting with medical supplies. Haydn is now 13 and a growing lad, and he needs some independence. He can't get out of the front door without somebody helping him. Curtis, now six, has the greatest medical needs and sleeps in the living room, which is also their dining room.

Bella is now 11 but has a makeshift bedroom in the boot room, and they all share just one toilet in the only bathroom. The flimsy structure and impractical design of the house means it is best to demolish the property, but that's an enormous undertaking.

Garry and Kyle have built an amazing family - now DIY SOS and their team of volunteer trades have an almighty challenge, never before attempted on the programme, to build an entirely new home in just nine days.

See all clips from The Big Build - Isle of Sheppey (2)