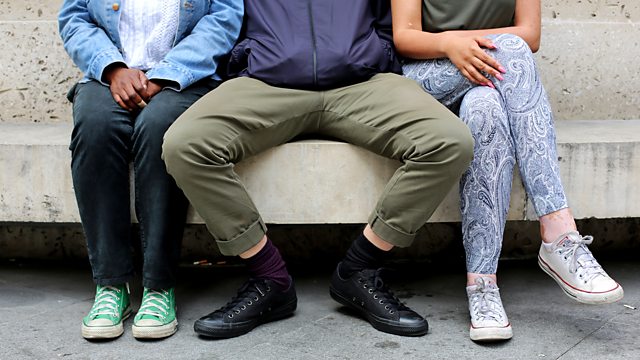 Discouraging manspreading in public. How a Conservative deal with the DUP is going down with Northern Irish women. Sports days: love taking part or try your best to avoid them?

Manspreading is when men take up a lot of space when they sit down on the bus or train by opening their legs out wide. Cities like Madrid and New York are discouraging the posture sayings its anti-social, but why do men sit like that and how appropriate is it? We hear from Zoe Strimpel from Sussex University and Justin Myers from British GQ magazine.

Arlene Foster, leader of the DUP in Northern Ireland, is in talks with Theresa May today about forming a Government. Over the weekend she was being labelled as the most powerful woman in the UK but there's been much talk about her party's anti-abortion stance as well as its opposition to gay marriage. So what do the women of Northern Ireland think? We get a snapshot from Belfast, and afterwards hear from journalist Siobhan Fenton, who takes a special interest in gender and Northern Ireland. She explains what the DUP stands for and whether or not it's good news for women.

And it's Sports Day season. Are you the type of parent who gets stuck in or goes all out to avoid them?

Salt-N-Pepa, Malala's Friends, Seduction: why women are taking the lead