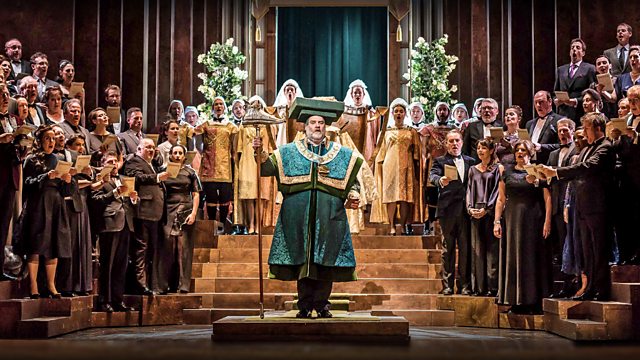 Sir Antonio Pappano conducts Wagner's epic comedy. Walther wants to marry Eva, but is only allowed do so if he wins the song contest held by the local guild of mastersingers. His self-taught method of song-writing breaks all the complicated rules, but fortunately the wise Hans Sachs is on hand to offer advice on both song-writing and love.

Presented by Martin Handley with commentary by Barbara Eichner.

Walther von Stolzing arrives in Nuremberg and falls in love with Eva Pogner. However, her maid Magdalene warns Walther that Eva’s father, Veit Pogner, has decided that Eva is to marry the winner of a song contest to be held the next day. As only members of the Mastersingers’ club can enter the competition, Walther decides to apply. Magdalene orders her boyfriend, David, who is an apprentice to the cobbler, Mastersinger and amateur composer Hans Sachs, to instruct Walther in the rules of Mastersinging. David is sceptical about Walther’s chances of success, and overwhelms him with details of the complicated rules.

Pogner and the other Mastersingers arrive for a meeting of their club and Walther asks to be admitted. Sixtus Beckmesser is the Mastersinger who oversees the rules of the club. He takes an instant dislike to Walther, seeing in him a potential rival for Eva’s hand, which he is hoping to win in the competition himself. Hans Sachs thinks that the competition as such is unfair, and that Eva should be allowed to choose her own husband. The others pay no attention to him. Pogner introduces Walther, who tells the Mastersingers that he learnt his art not through academic study, but from Nature. Hans Sachs is impressed, but Beckmesser sneers at Walther’s earnestness. Walther is allowed to sing a trial song, with Beckmesser marking his song against the rules; Beckmesser interrupts before he has finished because of the sheer number of Walther’s ‘errors’. Sachs stands up for Walther and praises his originality, but he is shouted down by the other Mastersingers. Walther’s application to become a Mastersinger is firmly rejected.

The assistants of the Mastersingers gather on Midsummer’s Night to prepare for the annual celebration of the club the next morning, on St John’s Day. Pogner has regrets about his decision and talks to Eva. He tries to reassure her: although she must marry a Mastersinger, she will be allowed to choose the winner of the competition. Magdalene snatches a few moments with Eva to tell her about Walther’s failure, and to warn her that Beckmesser is planning to serenade her. Sachs muses on the power of Walther’s song, which makes him think about the nature of art. With Walther having been rejected, Eva worries about Beckmesser possibly being the only one who will sing in the competition, thus leaving her no real choice. She seeks out Sachs and suggests that he should enter the song competition himself to win her hand. Sachs is deeply in love with Eva, but decides instead to help the young couple overcome the rules set by Eva’s father.

Walther and Eva meet, and decide to elope. Eva persuades Magdalene to pretend to be her when Beckmesser comes serenading. As the couple are about to escape, Sachs realizes what is going on, and loudly sings so that Walther, Eva and Beckmesser are all aware of his presence. The eloping couple are forced to hide, and Beckmesser is stopped from singing. Sachs and Beckmesser quarrel, but agree that Beckmesser can continue his serenade – although Sachs will mark any faults in it by striking with his cobbler’s hammer. Beckmesser begins his serenade again, and Magdalene – in Eva’s clothes – pretends to listen. Sachs is increasingly severe with Beckmesser so that the combined noise of Beckmesser’s singing, the blows from Sachs’s hammer and the men’s squabbling gradually wakes up everyone. David thinks Beckmesser is genuinely serenading Magdalene, and beats him up. A full-scale riot erupts and turns the Midsummer night’s dream into a nightmare, which prevents the young couple from eloping. The hubbub subsides as the Nightwatchman arrives.

Sachs muses on the strange madness of the preceding night, and the forces that were released in himself and everyone else. David returns from delivering Beckmesser’s shoes and making his peace with Magdalene, and sings Sachs his latest song Walther comes in and tells Sachs of a wonderful dream that he has had. Sachs suggests he capture the dream in music, and he helps Walther to shape a song out of it. Sachs encourages Walther to enter the competition with his new composition, and the pair go off to make more preparations. Beckmesser turns up, discovers Sachs’s jottings based on Walther’s song and thinks it is Sachs’s own new composition. When Sachs comes back, Beckmesser suggests that Sachs is planning to use the song in the forthcoming competition, and that the men are therefore rivals. Sachs denies this, and offers the song to Beckmesser to use if he wishes. As a pretext, Eva comes to complain to Sachs about her new shoes. She encounters Walther, ready for the competition, and Walther completes his song for her. Sachs’s support makes Eva finally realize how much the older man loves her. Sachs summons David and Magdalene so that all five can celebrate Walther’s new song.

The people congregate for the annual celebration of the club and for the song contest, and the Mastersingers solemnly process in. The crowd salutes Sachs in particular with affection, singing one of his poems, and Sachs introduces the competition. Beckmesser takes the stand first. He has been unable to make sense of Sachs’s jottings, or fit a tune to his text, and makes a fool of himself. As the people mock him, Beckmesser angrily denounces Sachs for his bad song. Sachs calmly replies that the song was not in fact by him, and that the next competitor will perform it properly. Walther sings his Prize Song, at first to the surprise of the Mastersingers and the crowd, but then to rapturous acclaim. Pogner grants him Eva’s hand, and proclaims him a Mastersinger. Walther angrily rejects the title. Sachs warns him about the dangers of forgetting the importance of tradition, and counsels him to let himself be celebrated and become a member of the prestigious club. Walther finally concedes, and the people praise Sachs for his wisdom.