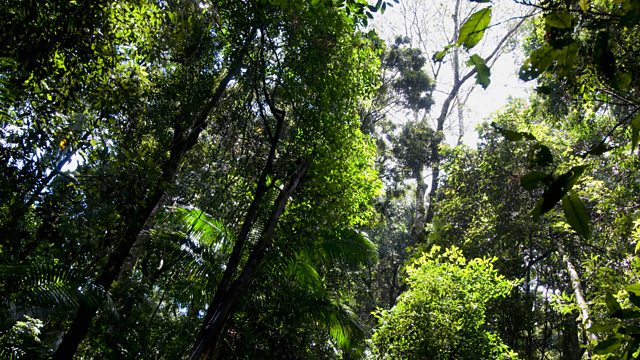 Tom Service explores how sound and music in wildlife and nature films alter our perception of the natural world. How does music help tell stories of the natural environment?

Tom Service investigates the music of, about, and for nature. How does music help tell stories of the natural world? And what can we hear in the music of nature itself?

Including views from inside the film-making process from the Bristol-based composer William Goodchild, and from the producer-director Vanessa Berlowitz and sound editor Kate Hopkins who have collaborated on award-winning series including the BBC's Planet Earth and Frozen Planet. Tom also talks about the art of listening with the field recordist and microphone builder Jez riley French, and the writer and composer Pascal Wyse.

To explore the place of sound and language, and the sound of language, in our understanding of the world around us, Tom meets the writer Robert Macfarlane, whose books about landscape, nature, memory and travel include Mountains of the Mind, The Wild Places and Landmarks. We also hear from the director Jennifer Peedom, who has collaborated with Macfarlane on Mountain, a new film commissioned by the Australian Chamber Orchestra.

And the music historian Daniel Grimley takes us on a whistlestop tour of composers' enduring relationship with landscape and the natural world, from Beethoven to John Luther Adams.