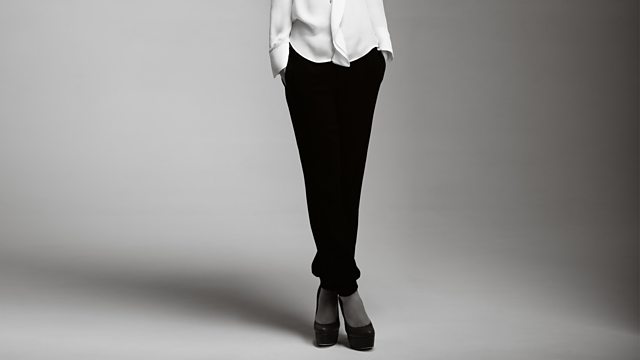 When Women Wore the Trousers

Documentary. Laura Barton presents an exploration of the history of trousers in the workplace and how an item of clothing evolved from function to fashion.

Laura Barton explores the little known story of a pioneering group of women who unknowingly challenged conventional notions of femininity and their working roles. The Pit Brow Lasses worked within the collieries of 19th century Wigan, Lancashire. Their unique re-appropriation of men's 'breeches' worn underneath hitched up skirts was originally adopted as a functional response to working within mines. These early adopters of trousers reached a similar degrees of notoriety that street-style stars do today.

When Women Wore the Trousers explores the history of trousers in the workplace and in fashion and discusses the impact that this every day garment had on society. Women were liberated by their work in the munitions factories and on the land during both World Wars but there was a fear that these 'new men' would continue donning trousers and become too independent. Coco Chanel famously appropriated sailors tops and trousers to create work-wear in its most elevated form and the fashion for utilitarian clothing continues to thrive today as discussed by fashion designers Faye and Erica Toogood. What do modern working women wear in the work place in the 21st Century? Chef Angela Harnett wears a uniform of a white shift and baggy trousers in her restaurant kitchen but it is a look that could be seen as fashionable in a different context.

With readings from the actor Maxine Peake, a discussion with Pit Brow Lass, Rita Culshaw about her choice of clothing in the pits and interviews with fashion curators Amy de la Haye and Fiona McKay and Wigan historian Alan Davies, we discover how women have worn trousers as a means of empowerment and the enduring appeal of work-wear in contemporary fashion.