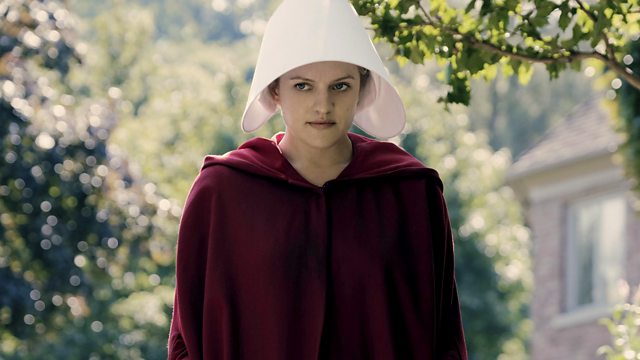 Elisabeth Moss on her role as Offred in The Handmaid's Tale, seven women in seven different decades of life discuss body image and is 13 Reasons Why suitable viewing for teens?

The Actor Elisabeth Moss discusses her role as Offred in the television adaptation of The Handmaid's Tale. Why is the story still resonant more than 30 years after it was first published?

Karen Gardner was one of the women who had accused Rolf Harris of molesting her when she was 16 years old. She tells us how she feels now that a court has decided Rolf Harris will face no further legal action over allegations of historical sexual abuse after a jury was unable to reach a verdict.

We discuss why the highly successful Netflix series 13 Reasons Why has become such a topic of controversy. The show features a high school girl who kills herself and throughout the series she explains why. Kate Delaney is a young writer who has experienced suicidal thoughts and thinks it's important to portray mental health problems so that they can be discussed. Writer Lucy Nichol has a teenage stepson who has struggled with his mental health and Alice Newton is a suicide prevention advisor for the charity Papyrus.

This week the trial into sexual assault claims made against the comedian Bill Cosby has begun. After years of rumours involving the US star, in 2004 women began to come forward with stories of alleged drugging and sexual assaults. But it has taken ten years to bring the issue to public consciousness in 2014 - why? The Playwright Bonnie Greer and filmmaker Ricardo Pollack discuss.

Elisabeth Moss, General Election Results and the Impact on Women

Salt-N-Pepa, Malala's Friends, Seduction: why women are taking the lead