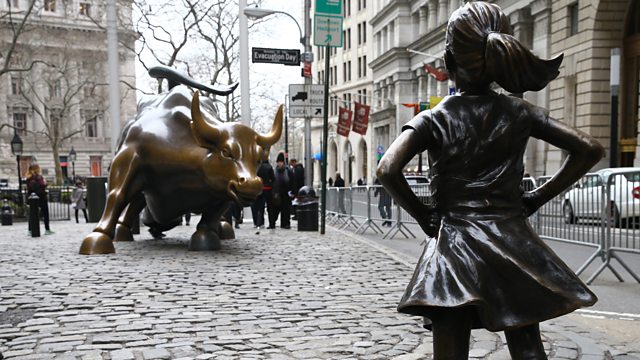 Fearless Girl, a 130cm bronze statue of a young girl in New York's financial district, is at the centre of a fierce debate about public art, corporate power, and feminism. New York-based arts journalist David D'Arcy reports from the city.

Now that the results are in, the official artist of the 2017 general election, Cornelia Parker RA, discusses documenting the 10-week campaign and the finished artwork she'll be creating for the parliamentary art collection.

The leading American tenor Lawrence Brownlee talks about singing as fast and sweepingly as a jazz sax solo, and delivering jive talk in grand classical style, in the European premiere of the opera Charlie Parker's Yardbird.

Radio 4's Poet in Residence, Daljit Nagra, discusses the work of poet and novelist Helen Dunmore, who died on Monday, and responds to Hold Out Your Arms, her final poem written just two weeks ago.

There is also a solo exhibition of her work at the Frith Street Gallery, London until 21 June 2017.

Image to the right: David D'Arcy with Fearless Girl

British Museum,  Dalljit Nagra's latest collection of poems, is out now in hardback.