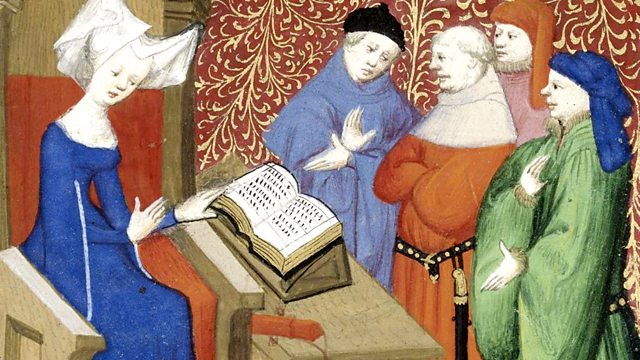 Melvyn Bragg and guests discuss Christine de Pizan (c1364-1430) who, according to Simone de Beauvoir, was the first woman to 'take up her pen in defence of her sex'.

Melvyn Bragg and guests discuss the life and works of Christine de Pizan, who wrote at the French Court in the late Middle Ages and was celebrated by Simone de Beauvoir as the first woman to 'take up her pen in defence of her sex.' She wrote across a broad range, and was particularly noted for challenging the depiction of women by famous writers such as Jean de Meun, author of the Romance of the Rose. She has been characterised as an early feminist who argued that women could play a much more important role in society than the one they were allotted, reflected in arguably her most important work, The Book of the City of Ladies, a response to the seemingly endless denigration of women in popular texts of the time.

The image above, of Christine de Pizan lecturing, is (c)The British Library Board. Harley 4431, f.259v.

Helen Swift at the University of Oxford

Miranda Griffin at the University of Cambridge

Marilynn Desmond at the University of Binghamton, New York

The Making of the Queen’s Manuscript: ‘The Book of the Queen’, the largest extant collected manuscript of Christine de Pizan's works – Edinburgh University Library

‘The Song of Joan of Arc’ by Christine de Pizan

Christine de Pizan (trans. Sarah Lawson), The Treasure of The City of Ladies; or, The Book Of The Three Virtues (Penguin, 2003)