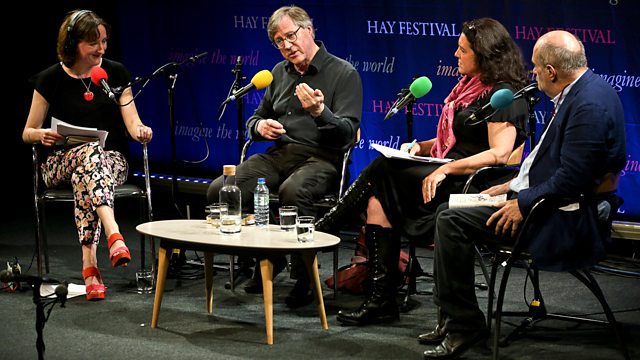 Colm Toibin's new novel House of Names explores the story of Clytemnestra and the murder of her husband Agamemnon. His other novels include The Testament of Mary, Brooklyn and Nora Webster.
Paul Cartledge is A.G. Leventis Professor of Greek Culture Emeritus at the University of Cambridge and the author of many books which look at the classical world including Ancient Greece: A Very Short Introduction, Ancient Greece: A History in Eleven Cities and Democracy: A Life
Bettany Hughes has presented many TV and Radio programmes exploring the classical world including Divine Women, Genius of the Ancient World, Banishing Eve and The Ideas That Make Us. Her books include Helen of Troy: Goddess, Princess, Whore, The Hemlock Cup and Istanbul: A Tale of Three Cities

Catherine Fletcher is a New Generation Thinker who has presented Essays and documentaries for BBC Radio 3. She is the author of The Black Prince of Florence The Spectacular Life and Treacherous World of Alessandro de' Medici

Part of Radio 3's week-long residency at Hay Festival, with Lunchtime Concert, In Tune, Free Thinking, The Verb and The Listening Service all broadcasting from the festival.

Artist Tom Phillips at 80, How do we save our plants?