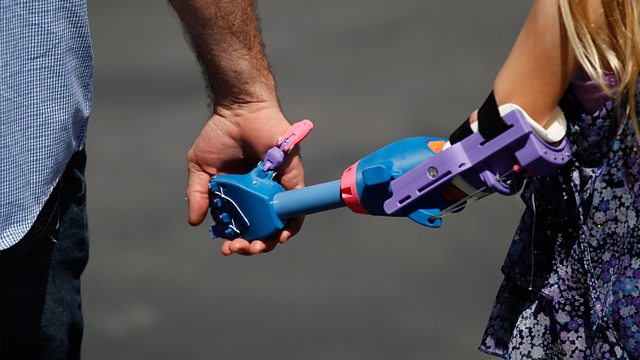 Print Me a New Body

Most parts of our bodies - lungs, hearts, faces - can all be replaced by transplant. The world's first full head transplant is mooted for 2018. Or is it a body transplant?

Most parts of our bodies - lungs, hearts, knees, faces - can all be replaced by transplant. The world's first full head transplant is mooted for 2018. Or is it a body transplant?

Jolyon Jenkins decides to explore how it's now possible to replace most of his body, by bioprinting, transplant or use of synthetic parts. He works methodically through his own body and interviews scientists at the cutting-edge in each area; and explores our emotional reactions to the idea of replacing different parts of our bodies.

In 2011, the world's first synthetic organ, a windpipe, was grown in a lab and transplanted. Now scientists at UCL's Department of Nanotechnology have come up with another 'world first' - the growth of a nose. There's a lab there known as the "human body parts store", using the patient's own stem cells and synthetic materials to create all many different body parts.

And now comes bioprinting - the process of using 3D printers to form human tissue. It's already been used to print everything from replacement skulls to vaginas, as well as prosthetic arms and legs.

Transplanting, and printing: an entire replacement body may only be a decade away.

There is no doubt that people feel a mixture of horror and hope at the idea that nearly all parts of us can be replaced. But what will that mean for us?