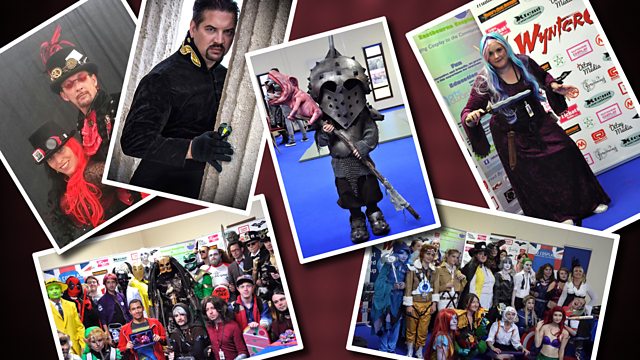 Radio 4 documentary. Yasmeen Khan dresses up as a radio presenter to talk to the people who put on the costumes and make-up of their favourite TV and film characters.

Yasmeen Khan dresses up as a radio presenter to talk to the people who put on the costumes and make-up of their favourite TV and film characters and gather together in halls and hotels for cosplay and costuming.

Many of these events, or Comic Cons, are huge with thousands of people flocking to mingle with each other and with some of the film and television stars who turn up to sign autographs, pose for photographs and top up their incomes.

But what do the so-called cosplayers get out of this? Costumes can be time-consuming and expensive, particularly as many cosplayers take pride in making their outfits as close to the real thing as possible. The bigger events can also be expensive. Yet many cosplayers will insist the costume world has changed their lives they have become more confident, have a secure social circle and all have a great deal of fun.

Yasmeen follows Star Wars cosplayer Beth Gourlay as she and her eight-year-old son Alexander son get ready for Digi-Con in Doncaster. Mum and son talk about what cosplay means to them as Beth helps Alex into his armoured Batman costume, making running repairs with needle and thread - and superglue. We also meet Kerry who is dressed as Ursula the Sea Witch from The Little Mermaid and Julian - a perfectly terrifying Darth Vader.

A few weeks later, Yasmeen travels to Margate to meet Thanet Cosplay founder Victoria Johnson and cosplay mover and shaker Scott Mason. She also talks to a principal Dalek, Barnaby Edwards, and C.A.T.S. Eyes actress Roz Landor, who made one appearance in Star Trek: The Next Generation.

Producer: Neil Rosser
A Spools Out production for Radio 4.