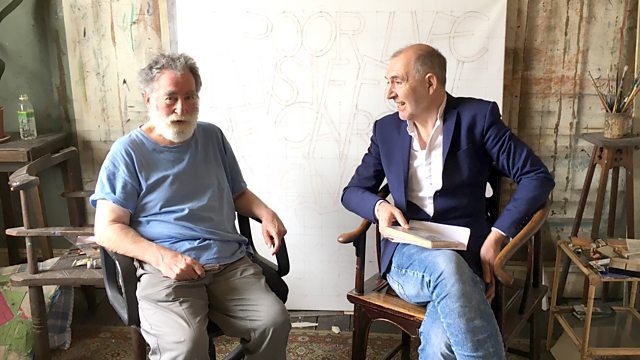 Artist Tom Phillips at 80, How do we save our plants?

Artist Tom Phillips talks to Philip Dodd about his career as he marks his 80th birthday. Plus a discussion about lilies with Pippa Greenwood, Murphy Westwood and Carlos Magdalena.

The artist Tom Phillips talks to Philip Dodd about his career as he marks his 80th birthday. His works range from sculptures, like a tennis ball with his own hair, to commissions for the Imperial War Museum and Peckham, and portraits of subjects including Sir Harrison Birtwistle and the Monty Python team. His interest in literature is seen in his version of Dante's Inferno and art made from reworking the text of a Victorian novel, in addition to his post card collection, photographic diaries and his role as a Royal Academician.

Plus, as scientists and policymakers gather at Kew to take stock of the world's plant diversity, Philip is joined by botanist Pippa Greenwood, conservationist Murphy Westwood, and the 'Plant Messiah' Carlos Magdalena to consider the lilies.

The Plant Messiah: Adventures in Search of the World's Rarest Species by Carlos Magdalena is published on the 1st of June.

Connected Works by Tom Phillips runs at the Flowers Gallery, Kingsland Road, London from May 26th to July 1st. The South London Gallery hosts the world premiere performance and an audio-visual installation of his opera Irma on the 16 and 17 September 2017, drawn from his Victorian novel artwork A Humument.