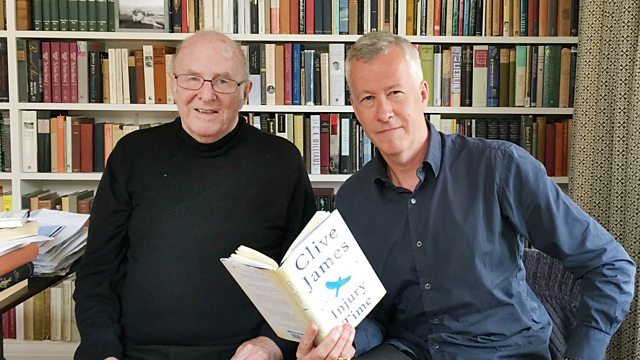 The author Clive James on the poems he thought he'd not live to write, producer Simon Chinn on when a film is not a film, and curator Elena Geuna on Damien Hirst's show in Venice.

When Clive James published his collection of poems Sentenced to Life in 2014, it was expected to be his last because he has terminal leukaemia. Now, three years later, he's publishing a new collection with the apt title of Injury Time. In his sunlit, book-lined studio, James talks to John Wilson about his urgent impulse to write, as he faces death, his meticulously crafted poems about life.

Netflix's film Okja was booed at the Cannes Film Festival today as the row over Netflix's place at the festival continues. For the first time, two Netflix films are competing for the Palme d'Or this year. The critic Jason Solomons reports from Cannes on the controversy, and is joined by Simon Chinn, Oscar-winning producer of documentaries Man on Wire and Searching for Sugar Man, whose latest film LA 92 was funded by TV and on-demand channel National Geographic.

Early last month Damien Hirst revealed his latest ambitious work Treasures from the Wreck of the Unbelievable at two large venues in Venice. The show's Italian curator Elena Geuna, who has worked with Damien on the project for the last five years, discusses the secrecy surrounding the decade-long planning of the exhibition.

Engelbert Humperdinck on 50 years in music

Okja, directed by Bong Joon Ho and  starring Tilda Swinton and Jake Gyllenhaal, will premiere globally on Netflix in 2017.

You can find more information on LA 92 on the National Geographic website here.

The 18-metre-tall Demon with Bowl (Exhibition Enlargement) at the Palazzo Grassi. Painted resin. By Damien Hirst.

‘Treasures from the Wreck of the Unbelievable’, curated by Elena Geuna, will be displayed at the Palazzo Grassi and Punta della Dogana in Venice until 3rd December 2017.