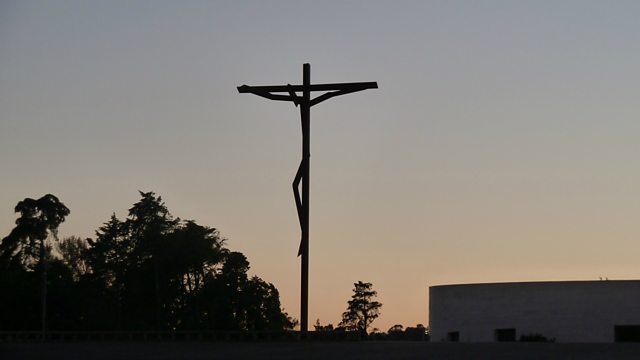 Does the consecration of an Anglican bishop in England by a breakaway South African Church make an eventual schism over the issue of homosexuality inevitable?

Does the consecration of an Anglican Bishop in England by a breakaway South African Church make an eventual schism over the issue of homosexuality inevitable? Edward Stourton explores the arguments with Gavin Ashenden, an Anglican priest who left the Church of England earlier in the year, and Anglican theologian Ian Paul.

A new report provides the most detailed analysis yet about the make-up of nearly half the adult population in Britain who describe themselves as non-religious. Author of the report Stephen Bullivant reveals the findings.

Belfast woman Laura Lacole on her legal bid to have her forthcoming humanist marriage legally recognised in Northern Ireland. And legal historian Professor Rebecca Probert explores the disparity in the law regarding humanist weddings across the UK.

As Iran prepares for its presidential election, Dr Siavush Randjbar-Daemi, Lecturer in Iranian History at Manchester University previews the vote.

On a high-profile pilgrimage to the Fatima shrine in Portugal, Pope Francis has canonised two of the three shepherd children believed to have seen a vision of the Virgin Mary there 100 years ago. Trevor Barnes reports.

And music composed for the inaugural Mass of Liverpool Metropolitan Cathedral will finally be performed to celebrate the cathedral's 50th anniversary. Elizabeth Alker has been to the rehearsals.

Archbishop of Canterbury in the Middle East, Mindfulness in School, Benedictine Monks and Diet