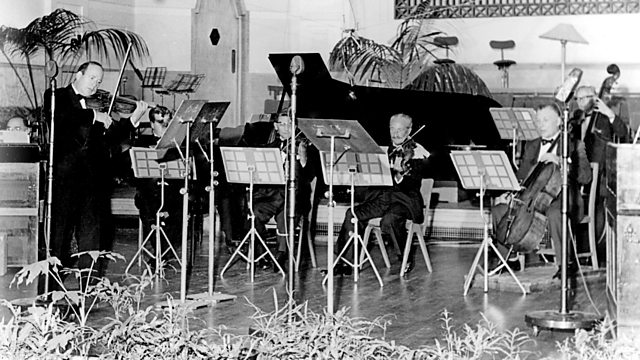 Samantha Bond and Scott Handy provide the readings from authors including TS Eliot, Homer, Langston Hughes and Dickens. Music ranges from Chopin and Britten to Oscar Peterson and Sandy Denny.

The Fight Between Carnival and Lent

Nostalgia can take many different forms, from intense feelings of sadness for a lost time or place, to wistful reflection on the passage of life. I wanted to examine these emotions through the range of music and readings that I have chosen.

The idea for this programme came to me on a lunchtime walk close to Broadcasting House. On my way to Regent's Park I passed a familiar landmark, a beautiful John Nash designed crescent that was being demolished. My initial sadness at its destruction was put into perspective when I later read that the original terrace had been partly destroyed in the Blitz and rebuilt after the war. I was feeling nostalgic for the loss of a fake building! This wave of misplaced nostalgia got me thinking about the past and the emotional triggers that transport us back.

We begin in high spirits with Hunt the Squirrel from Benjamin Britten's Suite on English Folk Tunes, A Time There Was. Although written in 1974, the piece recalls musical traditions of an earlier period and celebrates the rustic pursuits of the time.

The American poet Billy Collins asks us to remember the 1340s, 1572 and the 1790s before deciding that even the recent past - “this morning in the garden surrounded by the hum of bees” - was a better place to be than the present.

In Remember from Sondheim's A Little Night Music, former lovers look back over a past relationship with a mixture of fondness and amusement, yet each remembering different versions of the same events.

Nostalgia and memory are intertwined. T.S. Eliot writes about the importance of memory to a writer.  Triggers such as birdsong or leaping fish are snapshots frozen in time that can become “faded poor souvenirs of passionate moments.”

Oscar Peterson's interpretation of the Jerome Kern song Yesterday has its own nostalgic potency.  I have chosen to play a vinyl copy from deep in the BBC's record library and I love the warmth of tone and unique pops and crackles offered by the medium.

Milan Kundera writes that: “The Greek word for return is nostos and algos means suffering.  So nostalgia is the suffering caused by an unappeased yearning to return.” I have explored this idea with a reading from The Odyssey in which the Sirens try use their haunting singing to prevent Odysseus from ever returning home.  Tim Buckey's richly textured guitar reverb on Siren's Song adds an atmosphere to the scene that Homer could never have imagined!

The opening lines from Brideshead Revisited offer nostalgia for a very English scene. The country house itself and Oxford in the 1920s are lovingly remembered. The theme tune from the 1980s television version is indulgently familiar and makes me nostalgic for my own childhood evenings, gathered round watching it as a family.

The feelings of nostalgia for home are intensified by separation and by war. Florrie Ford sings Take Me back to Dear Old Blighty in a gloriously crackly recording from 1916, which would have had a particular resonance for soldiers in the trenches and their families.  In this context, Rupert Brooke’s yearning for the old vicarage at Grantchester, although written two years before the war, brings to mind an English idyll that would never be the same again.

I have included two pieces that examine nostalgic feelings between parents and children. Charles Causley writes about his parents who have died and are waiting for him somewhere beyond Eden Rock. In his imagination they are in the prime of their youth and are beaconing for him to cross the stream and join them.

Donnie Fritts gives a world- weary delivery of Amanda McBroom's song Errol Flynn. It is about her father, an actor who appeared on screen with the Hollywood great. The sentiment that “Life seems to be over before it begins” serves as a poignant reminder to make the most of the relationship with your parents while they are still alive.

I have also been inspired by other American sources.  In Let America Be America Again, Langston Hughes writes about the American dream that was unattainable for many ordinary citizens who would find “no freedom in the homeland of the free”. Copland’s stirring symphony perfectly conjures up images of open plains and rocky canyons.

In an extract from The Catcher in The Rye Holden Caulfield is nostalgic for his childhood museum visits, where the exhibits remain frozen in time.  Gatsby’s nostalgia was also for the American dream, he believed in the green light at the end of the dock showing the way the way “ceaselessly into the past” and Woody Guthrie sings about the lost way of life of the travelling hobo.

I have chosen to end the programme with the final words from The House at Pooh Corner where “in an enchanted place on top of the forest a little boy and his bear will always be playing.”  Perhaps they are dancing together to my final musical choice, another of Britten’s folk tunes Cakes and Ale.