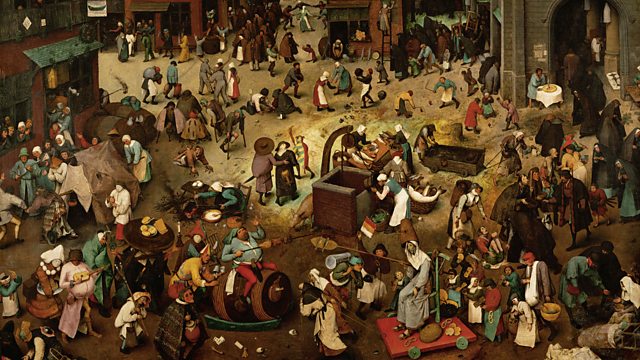 The Fight Between Carnival and Lent

A sequence of poetry, prose and music inspired by The Fight Between Carnival and Lent, a 1559 oil painting by Pieter Bruegel the Elder. Readers: Jenny Agutter and Peter Wight.

Jenny Agutter and Peter Wight with readings and music inspired by the 1559 oil painting by Pieter Bruegel the Elder. The painting depicts the folk traditions surrounding Carnival and Lent in the German lands in the early decades of the Reformation. The selection of music and readings explores the more universal struggle, between the desire to eat, drink, and let lose, embodied in Carnival, and the spirit of restraint and self-control personified in Lent. Including readings from Rabelais, Baudelaire, Donne, and Emily Dickinson, and music from Verdi, Mozart, Bach and Penderecki.

First broadcast in May 2017 as part of Radio 3's Breaking Free season of programming exploring the impact of Martin Luther's Revolution.

Producer's Note: The Fight between Carnival and Lent

This programme was produced to contribute to Radio 3’s series Breaking Free: Martin Luther’s Revolution, marking the 500th anniversary of the start of the Reformation.  Pieter Bruegel the Elder’s painting of 1559, The Fight Between Carnival & Lent, depicts the religious traditions and tensions in the northern German lands in the decades following the start of the Reformation, and the conceit of the programme is that Bruegel was tapping into the deeper undercurrents and repercussions of the Reformation.  Whether the painting is a direct response to the specific ideas in play at the time is a moot point, but it is certainly a work deeply embedded in the cultural setting in which those ideas lived.

But of course the contrast between carnival and lent speaks to a deeper tension in the human condition, between discipline and liberty, release and constraint.

Donne and Lindenberg are intended to present the opening arguments. Donne’s Holy Sonnets offer a painfully personal presentation of a human predicament to which Donne can only see one answer, which is constantly absent: the love of God.  I like the oblique, playful but slightly sinister atmosphere created by Lindenberg in Carnival as an alternative response: if what’s underneath is so painful, inhabit the surface instead.

The contrasting calls of Carnival and Lent are developed via a series of readings from Luke’s Gospel, Robert Herrick, Friedrich Nietzsche and Mikhail Bakhtin, along with Karol Szymanowski, Johann Herman Schein, Robert Schumann and Bob Dylan. Matters come to a head over drinking.  I enjoyed setting Emily Dickinson’s plea for abstinence and James Stephens’ account of drunken dissatisfaction with two Bach variations on the same theme.

After George Herbert’s beautiful plea for reconciliation in The Invitation, we explore gluttony and an overly moralistic response to it.  This opens out into the bleak landscape of Penderecki’s setting of the Improperia, Jesus’ remonstrations against his people from the Luke’s Passion (a piece of music that I find reminiscent of another of Bruegel’s paintings, The Triumph of Death). We end with the end of Lent in Gerard Manley Hopkins’ poetic sigh of relief in Easter Communion, and an extract from Wagner’s Prelude to Parsifal, a piece of music that Cosima Wagner claimed was associated with the thought ‘This is how Good Friday ought to be’.